Finery in stone and mortar : The Tribune India

Finery in stone and mortar

Given India’s rich cultural history and diverse religious beliefs, temples have always been an integral part of our ethos and culture. 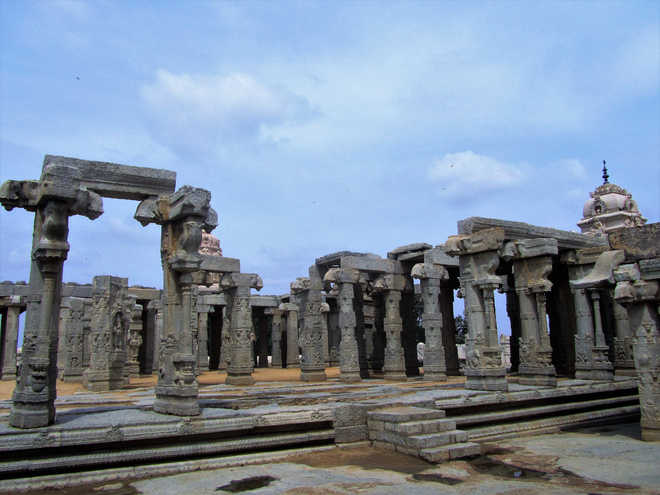 Craft at best: Pillared corridors, sculpture of Nandi bull — cut out of a single granite rock— and a mammoth Nagalinga are the main attractions at the Veerabhadra Temple Photos by the writer

Given India’s rich cultural history and diverse religious beliefs, temples have always been an integral part of our ethos and culture. These intricately carved structures in stone are an epitome of grandeur. Built by Indian rulers across the centuries, these not only symbolised faith, but were also signs of socio-economic development of that particular era. Travel to any part of the country to explore architectural gems in the form of ancient temples. The Veerabhadra Temple located in Lepakshi, near Bengaluru, is one such hidden treasure.

Legends of the holy town

Situated about 120 km from the bustling IT city of Bengaluru is the quaint town of Lepakshi. It is located in the Anantapur district of Andhra Pradesh. There are several myths associated with the temple town. According to one legend, the town finds a mention in the Ramayana. When Sita was being abducted by Ravana, the vulture god Jatayu tried to protect her, who was but defeated by Lankan king. Later, Lord Rama helped the bird attain moksha or salvation by saying the words “le pakshi” or “rise bird”.

The temple at Lepakshi was built by Virupanna who served as the treasurer of the king of Vijayanagara, Aliya Rama Raya. According to another legend, he was accused of misappropriation of funds and in order to escape the punishment of the king, he removed his eyes and placed it on the walls of the temple.  The village was then known as “Lape-Akshi,” which means the village of the blinded. The eerie part is that there are two maroon marks on a particular wall, at the entrance of the temple, believed to be the bleeding eyes of Virupanna.

As you enter Lepakshi, you are greeted by the statue of a gigantic bull in a couchant position that has been cut out of a single granite rock.  The monolithic bull — at a whopping 10m in length and 6 m in width — is one of the largest statutes of the bull god in the country. Carved on it is an elaborate necklace; its intricacy adds beauty to the west-facing monument. It is a piece of outstanding architecture and bears testimony to the brilliant craftsmanship of that time.

From pillar to pillar

Believed to have been built in the 15th century, the main temple has two enclosures. The entrance to the first part faces the north. A well-ornate gatehouse tower or gopura (symbolic of the temples’ architecture in the south) is the entrance to the temple. The second enclosure consists of the garbha-griha or sanctum sanctorum, antarala (a small cell built next to the sanctum), mukha mandapa (a hall) and a pillared corridor.

The temple has shrines of Lord Shiva, Parvati, Vishnu and Veerabhadra. Intricately carved pillars, the monolithic Nagalinga and exquisite fresco paintings are just some of the several unique features of the temple.

The mukha mandapa or the main hall displays a stunning structure of 100 ornate pillars that are carved to perfection with figures of dancing ladies, musical instruments, etc. Apart from this, there are symbols of gods, goddesses and other mythical figures that adorn these pillars. Beautifully carved ceilings, corridors and porches of the temple are noteworthy. Also, its outer enclosure has a large, intricately carved statue of Ganesha.  Close to this is the massive Nagalinga, essentially a three-coiled serpent with seven hoods, sheltering a Shivlingum in black-granite.

A differentiating feature of the temple is its mural paintings that date to the Vijayanagar period.  Depicting themes that are predominantly mythological, the level of detailing in these frescoes, created using vegetable and organic dyes, is just awe-inspiring.  In fact, the mural of Veerabhadra, near the Garbha-griha, is said to be one of the largest in India. The paintings do need some restoration and maintenance as many of them are in poor condition and are peeling off.