The student chapter of the Indian Society for Technical Education (ISTE) of the Guru Nanak Institute of Management and Technology (GNIMT), Gujarkhan Campus, Model Town, organised a farewell party for outgoing MBA and MCA batches. 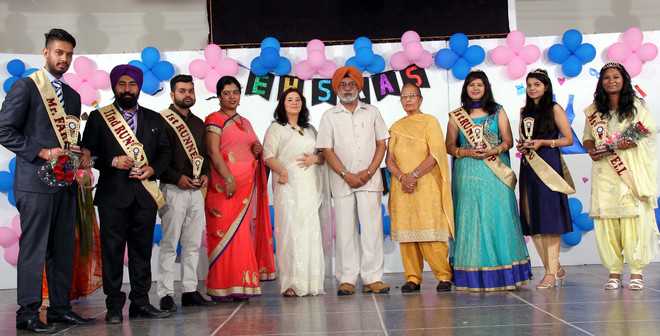 The student chapter of the Indian Society for Technical Education (ISTE) of the Guru Nanak Institute of Management and Technology (GNIMT), Gujarkhan Campus, Model Town, organised a farewell party for outgoing MBA and MCA batches. Director HS Singha exhorted the outgoing students to work hard and do well, and make the institute proud of them. Gurpartap Singh was declared Mr Farewell in MBA and Shradha Srivastava was Ms Farewell. Davinder Singh and Paramjit Singh were first and second runners-up, respectively, among boys and Sophia Bansal and Shivali from girls. Mr Well Dressed were Dilpreet Singh, Manmeet, Maninder Singh and Sharanpreet. Ms Well Dressed were Bableen, Simran, Tanya, Nikita and Mehak among girls. From MCA, Angad was Mr Farewell and Ravneet was Ms Farewell. First runner-up (Girls) was Isha and second runners-up were Aarushi and Khushboo.

The NSS Unit of Sri Aurobindo College of Commerce and Management (SACCM) organised a visit to the Ayali Government School, under the guidance of Professor Meenu Goyal and Professor Jai Parkash. The volunteers interacted with the schoolchildren and appreciated the coordination of the school management. The volunteers interacted with schoolchildren, inculcating social values in them. A drawing competition was organised for students of Class IX and X on various topics such as water pollution and obey traffic rules. Slogan-writing and spell bee competitions were also conducted.

Gurpreet Kaur, student of BA I of the Khalsa College for Women, Civil Lines, Ludhiana, brought laurels to the college by bagging first prize in the turban-tying competition organised by Gurdwara Sahib, Sidhwan Kalan, Jagroan. Gurpreet Kaur was accorded a prize of Rs 3,100, along with a trophy. The managing committee of the college and Principal Dr Mukti Gill appreciated the efforts of the students and the teachers.

Students of the Khalsa College for Women, Civil Lines, performed well in MA-I (Semester-I), results of which were declared by Panjab University on April 17. Two college students are among top 10 university position holders - Aishwarya Sehdev bagged the II position and Jasjot Kaur bagged the VII position.

Government College for Girls, Ludhiana, organised a closing ceremony of the science society. Professor Mohinder Kaur Grewal was the chief guest on the occasion. The function started with a welcome speech by society president Jasleen Kaur. Students of BSc (non-medical) enacted a motivational play, 'Spirits -reality or just a mystery'. A quiz was also organised in which five teams had participated. Thereafter, teacher Dr Ravinder Kaur, who will retire on April 30, was honoured for her services. — TNS