Keeping the herd together

The stray cattle menace has attained alarming proportions and acquired political dimensions in recent years. The population of stray cattle in the country is estimated to be 40-50 lakh. The unwanted males and the infertile, old and infirm female cattle with little alternative utility and no market value to the farmers are abandoned clandestinely by their owners. The problem has worsened with the tightening of the noose around illegal trade and the closure of unauthorised abattoirs, especially in northern and central Indian states. 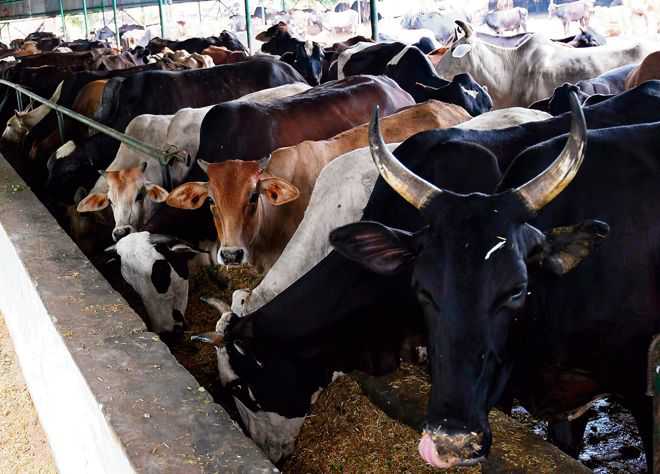 Grants given to the gaushalas should be decided on a per-animal basis and their distribution should be regular.

The stray cattle menace has attained alarming proportions and acquired political dimensions in recent years. The population of stray cattle in the country is estimated to be 40-50 lakh. The unwanted males and the infertile, old and infirm female cattle with little alternative utility and no market value to the farmers are abandoned clandestinely by their owners. The problem has worsened with the tightening of the noose around illegal trade and the closure of unauthorised abattoirs, especially in northern and central Indian states.

The Delhi High Court recently ruled that the menace was a violation of the city dwellers’ right to live, guaranteed by Article 21 of the Constitution. With no proper mechanism for the disposal of these creatures, religious charities came forward and established cow protection shelters — what we today call gaushalas.

Many gaushalas served their purpose fairly well and some of them developed in size and diversified and became institutions in their own right. Some of them got the support of local communities; while many others remained marginalised with scarce resources. In recent times, with the heavy influx of stray cattle, most of these gaushalas are overcrowded, lack sufficient space, monetary, manpower and other facilities/resources for proper upkeep and sustenance of these animals. The Central and state governments are now strengthening the existing gaushalas and helping in setting up many more. With gaushalas being animal welfare entities, it is imperative to examine their functioning, resources, endowments and whether they have the potential to turn themselves into self-sustaining centres/institutions.

Haryana has been the pioneer in establishing and maintaining gaushalas. The first one was established at Rewari in 1879 by Swami Dayanand. The state is home to 513 gaushalas, housing about 3.6 lakh head of cattle (about 20 per cent of the total population of 18 lakh). In addition, the state has around 4 lakh stray cattle, as per news reports. The cattle population dynamics of the state show that from 2007 to 2012, the number of indigenous cattle decreased by 17.6 per cent whereas that of crossbred/exotic cattle increased by 75.9 per cent. This is distressing news for the indigenous varieties which have tremendous genetic importance in terms of resistance to diseases, climatic resilience and acclimatisation capacity to the local conditions. Gaushalas have been used to preserve these indigenous animals. In Haryana, of these indigenous cattle, 44.5 per cent are maintained by the gaushalas (Haryana Gaushala Sangh, 2015).

The Haryana Government’s protection and preservation efforts for this animal have been spelt out in its recent efforts. It has passed the Haryana Gauvansh Sanrakshan and Gausamvardhan Act, 2015, replacing The Punjab Prohibition of Cow Slaughter Act, 1955.The state has taken initiatives like the scheme for the establishment of 40 Gau Abhayaranyas, setting up of the Gau Seva Aayog, the Nandi Gram for cattle conservation and promotion, especially male cattle, the scheme for opening Gau Chikitsalyas. There is also a plan to open gaushalas on the jail premises for proper utilisation of space.

A study was conducted on a sample of 21 gaushalas spread across the state, selecting a reputed one from each district. Only those gaushalas were included which had a good historical standing and which maintained financial and animal record and were ready to cooperate in this endeavour. They were categorised as small, medium and large with the average number of animals being 1,306, 3,003 and 5,208, respectively (the number of animals maintained ranged from 350 to 6,306). They were also divided into two categories: Type-A, those which had financial backing by village communities primarily for animal welfare with no commercial interests, and Type-B, which included other gaushalas. All these had executive committees to regularise their functioning. These were all registered under a society or a trust.

The Animal Welfare Board of India (AWBI), Nagar Nigams and the Haryana Gau Sewa Aayog are the major agencies providing grants to gaushalas. The availability of grants was, however, found to be irregular and incomprehensive. The Gau Sewa Aayog supports the gaushalas for the purchase of fodder and celebrating Gopashtami.

Of the total receipts, donations and charity contributed up to 74.2 per cent, grants from different sources up to 6.5 per cent. Sales contributed about 14.5 per cent and the miscellaneous income was only up to 4.8 per cent of the total receipts. The expenditure was worked out to be Rs 1.73 crore per year, while the receipts totalled Rs 1.79 crore.

The net receipts per animal of the Type-A gaushala were Rs 570, mainly due to the higher amounts of grants and charity they receive, where these were Rs 279 in the case of Type-B gaushalas, which have lesser expenditure component. The sales component was better for Type-B.

Generally, it is believed that a larger-sized gaushala is uneconomical. But this study shows that all economic indicators are better for larger gaushalas as compared to the smaller ones. Larger ones attract greater charity mainly because of their reputation and credibility among the local people which has been established over the years by their devotion to cow welfare and protection.

Looking at the revenue components of the gaushalas, we find that the largest share (60.15 per cent) is from the sale of milk, followed by dung and compost (23.35 per cent), other sales (15.6 per cent) and urine and its products which contribute only 0.9 per cent. Overall, the revenue generation in these gaushalas is meagre. But this is the factor which has the potential to raise the sustainability level.

The level of animal welfare in selected gaushalas was assessed on a 20-point welfare indicator-based scale developed by the National Dairy Research Institute (NDRI), Karnal. The scale encompasses an integrated assessment of two resource-based welfare components (housing and other facilities; availability of feeds and fodder) and one animal-based welfare component (animal health, performance and behaviour) with a weightage of 30, 30 and 40, respectively, and aggregated into an overall welfare index with a total score of 100. The gaushalas scoring more than 80 points on the scale were ranked as very good; those scoring between 60 and 79 as good; between 40 to 59 average; and those with a score less than 40 were categorised as poor.

Contrary to the popular perception, cattle welfare was good in an overwhelming majority of the selected gaushalas (71 per cent) and average in about-one fifth (19 per cent). Only a small percentage were in the poor category (5 per cent) and an equal proportion ‘very good’. The larger gaushalas fared better with an average score of 77, followed by medium (70) and small (61). The larger gaushalas being older and well entrenched in rural settings had better basic infrastructure in terms of animal housing facilities, better availability of feeds and fodder, healthcare facilities and thus were in a position to ensure better animal husbandry, healthcare, animal performance etc. Furthermore, Type-A gaushalas, the bedrock of the gaushala system of cattle-keeping, performed better on the animal welfare front with an average score of 72; Type-B gaushalas scored 65 as they fared marginally poorly on resource-based indicators. If a welfare score of 60 is considered acceptable, two resourse-based indicators —  microclimate protection measures and feeding & watering space availability — and four animal-based indicators — cow productivity, their body condition scores, breeding practices and reproductive efficiency — were the most compromised indicators which need improvement.

To arrive at the weighted value of the variable and to develop the index, normalisation was done on all variables. Combining these three indices and taking their weighted average, the composite sustainability index was developed for each gaushala. Then these were categorised based on the sustainability levels.

Surprisingly, the net receipts per standard animal unit (SAU) in a year and employment generation were significantly greater in Type-A gaushalas which are backed by village communities and where there is no commercial orientation. It was also higher among large gaushalas, which are situated mostly in rural areas and supported largely by the village communities. The operating ratio was of a similar fashion. The proportion of productive animals and autonomy, an important variable for sustainability, were in reverse order. It was less in larger and Type-A gaushalas.

From the point of view of social sustainability, too, Type-A and larger gaushalas have better score of variables like cattle protection, contribution to rural development and community relations. There was a clear-cut dispensation of these social variables in favour of village community gaushalas which are also larger in size.

Environmental sustainability indicators offer a mixed bag. Some variables are better among large gaushalas like biopesticides and vermicompost production and better utilisation of dung.

The sustainability level assessed over size groups also shows this trend in favour of the Type-A variety. From sustainability indices formed on the basis of economic, social and environmental variables, we found that large and Type-A gaushalas are better managed and are more sustainable.

Based on this study, we can infer that:

n Miscellaneous income, which includes rent, equipment hire charges, bull service, processing charges, sale of scrap etc. and other sales, which includes sale of heifers, cows, dead animals and grains etc. has a strong impact on the sustainability of gaushalas.

n Grants given to the gaushalas should be decided on a per-animal basis and their distribution should be regular, though all these needs to be increased significantly, as desired by the gaushalas’ management.

n Involvement of gaushalas in community development programmes like training etc. and production of bio products should be encouraged.

n Animal welfare should be one of the criteria while deciding the quantum of grants.

Flow of funds in Haryana

Animal Welfare Board of India, Nagar Nigams and Haryana Gau Sewa Aayog are the major agencies providing grants to gaushalas. Of total receipts, donations and charity contribute up to 74.2%; grants from different sources, up to 6.5%; sales, about 14.5% and miscellaneous income 4.8%. The receipts totalled Rs 1.79 crore annually. The expenditure was worked out to be Rs 1.73 crore/year, including 49.81% for feed and 21.55% fixed costs.

The level of animal welfare in selected gaushalas was assessed using a 20-point based scale developed by the National Dairy Research Institute (NDRI), Karnal. The scale encompasses an integrated assessment of two resource-based welfare components (housing and other facilities; availability of feed and fodder) and one animal-based welfare component (animal health, performance and behaviour) with a weightage of 30, 30 and 40 points, respectively, and aggregated into an overall welfare index with a total score of 100. Gaushalas scoring over 80 points were ranked very good; 60-79, good; 40-59, average; less than 40, poor.