MANDI/KULLU: The Chandigarh-Manali National Highway-21 was partially restored after more than 8 hours this evening. 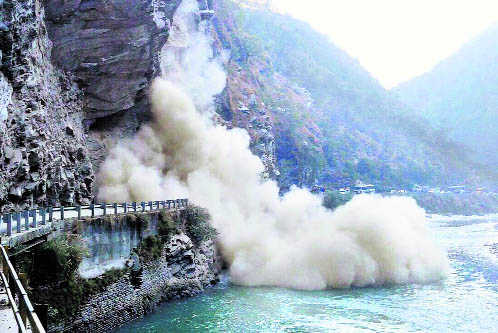 The Chandigarh-Manali National Highway-21 was partially restored after more than 8 hours this evening. A massive landslide blocked the NH near Thalout in the district around 9.30 am today.

National Highway Authority of India (NHAI) SDO KR Guleria said the road was opened for small vehicles around 6 pm today and it would remain open till 7 am tomorrow.

He said five earth moving machines were pressed into service at 10 am to remove debris from the road. The operation to remove the remaining debris would resume at 7am tomorrow and the highway would probably be opened for all types of vehicles by 11 am, he added.

Deputy Commissioner Sandeep Kadam said a team of technical experts visited the site to examine the strata of the hill to avoid mishap in the future.

Passengers of a private bus had a narrow escape when rolling stones hit the bus just before the landslide. Windowpanes of the bus were damaged and all passengers escaped unhurt. Nearly 50 metre of the stretch of the highway was damaged in the landslide.

Superintendent of Police SP Prem Kumar Thakur said all vehicles from Mandi to Kullu and Kullu to Mandi were diverted via Kataula road.

Roadways buses were diverted via Kataula in Mandi district, but the Volvo bus service on the Manali-Chandigarh route would remain suspended till the restoration of the national highway.

The police said necessary traffic personnel had been deployed to ensure free flow of traffic on the alternate route.

Additional District Magistrate (ADM) Vivek Chandel visited the spot to review the situation. The ADM said efforts were on to restore the national highway for all types of vehicular traffic at the earliest.

Kullu HRTC Regional Manager stated that long-route buses had been diverted through the Kataula road, but due to massive traffic jam, the buses which had left in the morning had not reached Mandi by evening.

Hundreds of tourists were stuck in Manali with the suspension of Volvo bus service. The passengers of five Volvo buses were shifted to other buses, but they were also stuck in the massive traffic jam on the Kataula road.

Vinay, a resident of Manali, stated that around 35 Volvo buses visit the tourist town everyday and these could not ply on the narrow alternate route to Mandi through Kataula. Rahul, a resident of Kullu, said the government should prioritize the construction of road through Bhubu tunnel and the road through Kandi and Kataula to Mandi should also be widened.

Patrick, a Canadian national, stated that he had to catch an international flight tomorrow night and he was stuck due to the landslide and would try his luck through the only alternate road out of Kullu.

Abhishek Rai, an environmentalist in Kullu, stated that due to massive construction carried out in the Thalout region by hydel power projects, the entire strata had loosened and landslides had become a frequent affair in the region. He added that tampering with the fragile ecology of the hills would lead to such disasters.

Kullu HRTC Regional Manager stated that long-route buses had been diverted through the Kataula road, but due to massive traffic jam, the buses which had left in the morning had not reached Mandi by evening