Memorialising anew the events of 1984 : The Tribune India

Memorialising anew the events of 1984

The turbulent year of 1984 is a subject of several memorialising events organised both in Punjab and by the diaspora. 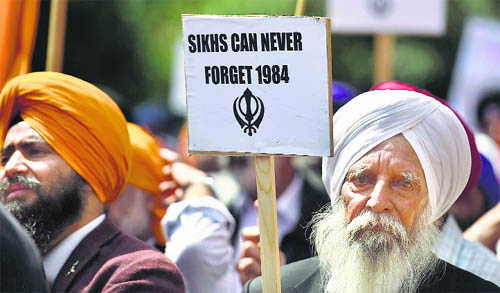 The turbulent year of 1984 is a subject of several memorialising events organised both in Punjab and by the diaspora. Most of these are either political or sectarian, and fail to capture the experiences of the common people during the heyday of militancy. Both the state and radical religious establishments have blamed each other for the incidents leading to the events in 1984. We thus remain embroiled in a political rhetoric where Hindus and Sikhs are positioned against each other.

On an academic visit to a gurdwara in Paris in 2012, I wanted to experience the lives of Punjabis there. I was initially unaware that the gurdwara I visited was managed by the Sikh immigrants who had fled from Punjab in the 1980s after the French state granted them political asylum. The year 2012 also saw the peak of the turban controversy in France and Prime Minister Manmohan Singh was at the helm of affairs in India. It was being hoped that his intervention would help resolve the issue. The gurdwara walls had huge portraits of Jarnail Singh Bhindranwale, Shahbeg Singh, Fauja Singh, among others. I met the gurdwara committee president, Chain Singh, to procure some reading on the gurdwara and Sikhs in France. It was then that I learnt that his son was actively involved in resolving the turban issue with the French government. While I waited in the gurdwara office, many other “French” Sikhs joined me in a conversation on how Sikhs came to France during the 1980s. The conversation invariably turned into how a “Hindu” Indian state and “Hindu” Indira Gandhi were responsible for the “invasion” of Golden Temple. I almost felt like being singularly blamed for the events in 1984.

I was often asked about my religious identity and when they realised that I was “born” a Hindu, their rhetoric of “badla, shahidi, be-adbi” and “azadi” turned milder. However, when confronted with tough questions about whether it is correct to term 1984 a conflict among the Hindus and Sikhs, they amended their arguments. Towards the end of the two-hour discussion, Sukhdev Singh, who was once an active member of the All India Sikh Students Federation, pointed out how he yearned to visit Punjab but felt “humiliated” when he had to enter India through an airport named after the “invader” of Golden Temple. However, he did confess that the events of 1984 were political and not religious. That year nevertheless remains crucial for the existence and sustenance of Sikh identity in France and elsewhere in the diaspora and gives meaning to their sense of cultural uprootedness. Chain Singh later narrated how at “pind” Bibony, a suburb of Paris, a majority of Punjabis spend difficult lives and engage in menial works.

Here in Punjab, 1984 remains etched in the farthest zones of memories of the new generation of Punjabis, something that is remembered as a bad memory, at best forgotten. The popular perception of the older generation generally remains sceptical and sometimes polarised in their sensitivity towards the events that led to 1984. It is the radical element among the Sikhs that sustains its political existence through the events of 1984 and hence gets legitimisation in the diaspora. The urban “Hindu” rhetoric laments the selective amnesia that the official and radical memorialising maintains on the Hindus who were targeted before and after 1984. This rhetoric in fact significantly feeds into the radical Hindu rhetoric of presenting them as the victims of militancy. Even academic debates seldom take account of the targeted killing of non-Sikhs in Punjab. Would such narratives deny the terrible experiences of the common people, both Sikhs and Hindus, who were at the receiving end of both the militants and the state, and feared for their lives?

“Fear” was thus a far more fundamental social experience that went beyond the restricted debates on the factual inaccuracies in the accounts of people killed. Small towns and villages that were severely ruined by the economic breakdown have still not fully recovered. What also remains a fact is that Punjab is the only state in India where militancy has weaned away and despite the self-laudatory claims of suppressing it, it was not the state but the people’s resolve to defeat sectarianism and radicalism that led to the demise of militancy. However, its manifestation abroad is sustained more as a rhetoric. Particularly in the West, the Punjabi (Sikh) diaspora is far more concerned to assert their sense of loyalty for the respective nation-states through memorialising their contribution in the First and Second World Wars. The terrible events of 1984 are thus etched in their existential questions of identity and separated from everyday concerns of life in their homeland.

In Punjab, the political conflicts have led to a strategic manoeuvring of the ruling Akali-BJP alliance where the tensions of the past remain politically embedded but the social histories are being continually redefined. The aftermath of the events of 1984 manifests far more deeply in institutions, both academic and political, than in everyday life. However, a denial of radical Sikh violence against Hindus and equating the latter with the Indian state only feeds into the rhetoric of Hindu communalism. It is far more important to accept the contribution of both radical Hindus and Sikhs in the development of an atmosphere of sectarianism in the region.

Thus, the crucial question of how and which past will define the contours of the present remains very relevant. The rapid succession of violence in Punjab from the early 20th century recruitment for fighting the First and Second World Wars, Partition riots, the militancy and state repression during the 1980s and 1990s have today erased the memories of peace that define the dominant narrative of Punjab’s history. This misrepresentation and overwhelming focus on defining “events” — riots, wars, Partition, etc — takes away the agency of people in defining the social contours. Memory thus plays a significant role in repositioning the past in the contours of the present and unravels interesting possibilities of reconciling several such traumas experienced by Punjab in the past too.

Do we also need to possibly rethink and do away with the political symbols of dominant nation-state etched on the sentiments of Sikhs in Punjab and abroad, ones that do not allow the pain that it entails to subside? It is thus important for the civil society to take a lead in initiating a peace and reconciliation mission in Punjab, to envision a future which addresses deeper layers of violence and trauma etched in the subconscious terrains of Punjabi psyche.

There can thus be a new way of memorialising 1984 and situating it in the contours of human tragedy.

(The writer is a Fellow at the Indian Institute of Advanced Study, Shimla)