MUMBAI: A court in Mumbai held a man guilty of an acid attack on Haryana girl Preeti Rathi in 2013. Rathi, whose family originally came from Rewari and lived in Delhi, died of multiple organ failure in 2013, a month after Panwar threw acid on her. 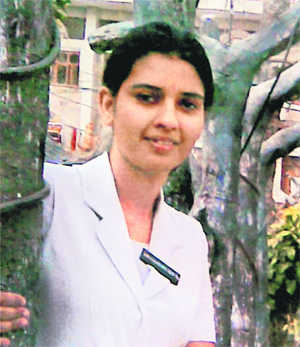 Rathi had gone to Mumbai to take up a nursing position in a naval hospital, INHS Asvini, in Mumbai’s Colaba. PTI file photo

A court in Mumbai on Tuesday held a man guilty of an acid attack on Haryana girl Preeti Rathi in 2013.

Ankur Lal Panwar, a hotel management graduate, was found guilty of offences under Sections 302 (Punishment for murder) and 326 B (Punishment for attempted acid throwing) of the Indian Penal Code (IPC).

Rathi, whose family originally came from Haryana’s Rewari and lived in Bhakra Beas Management Board Colony in Delhi’s Narela, died of multiple organ failure in June 2013, a month after Panwar threw acid at her.

Rathi had gone to Mumbai to take up a nursing position in a naval hospital, INHS Asvini, in Mumbai’s Colaba. The incident occurred as soon as she alighted a train at Mumbai's Bandra Terminus on May 2, 2013.

Outside the court, Panwar's mother Kailash demanded a CBI inquiry claiming her son had been falsely implicated. "We have been implicated just because we were poor. I want a CBI inquiry into the case," she said.

Rathi's father Amar Singh Rathi hoped Panwar was awarded capital punishment. "It took three years for us to get justice but I am happy that it has been finally delivered. I hope he gets death sentence," he said.

Arguments for Panwar’s sentence will begin on Wednesday. — Agencies