Chemical ripeners are here to stay

There are two types of fruits, depending on the ripening process. Grapes, oranges and strawberries ripen on the trees and have to be picked only after they are fully ripe. Such fruits cannot be induced to ripen if plucked prematurely. Fruits such as mango, banana and papaya have to be picked unripe and then sent to the markets. These are induced to ripen at their point of sale. This is usually done by wholesalers. This is a normal as well as an essential practice, not a malpractice. 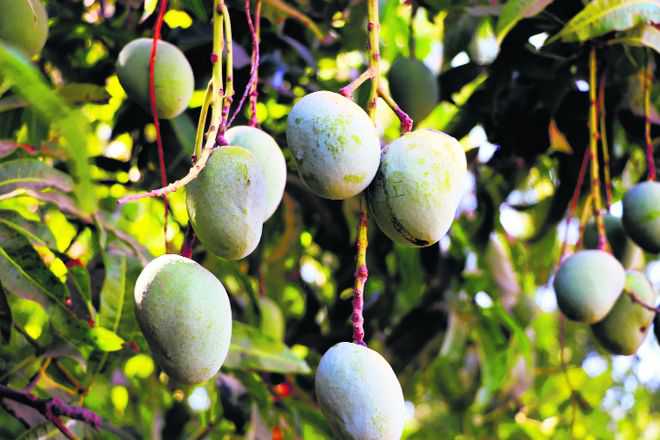 There are two types of fruits, depending on the ripening process. Grapes, oranges and strawberries ripen on the trees and have to be picked only after they are fully ripe. Such fruits cannot be induced to ripen if plucked prematurely. Fruits such as mango, banana and papaya have to be picked unripe and then sent to the markets. These are induced to ripen at their point of sale. This is usually done by wholesalers. This is a normal as well as an essential practice, not a malpractice.

A key factor is the distant location of retail markets from the orchards. The bananas we eat in the northern region come from the western parts of the country. These are transported from there to all corners of India.  In the case of mangoes, safeda come from Andhra Pradesh and is then sold in North India. For doing so, the fruits must be picked unripe. Only then can these be transported to distant places. Goods trains are laden with bunches of unripe bananas. Can ripe bananas be shipped like that? No. As a horticultural practice, picking fruits before full maturity and then inducing them to ripen later is as essential as other practices in the orchards. It is being practised since the start of commercial fruit production.

During the past 70-80 years, the tendency among fruit growers has been to plant only the most popular commercial varieties.  It is estimated that more than 80 per cent of the mango trees in orchards of North India are of dasheri variety. About 90 per cent of the plum trees in Solan and Shimla districts are of a single variety, Santa Rosa. This limits their fruiting season to a few days. The plum ripens in 10 days. So, the fruit has to be picked and sold during this period. It leads to a glut in the market and the prices crash. This forces the growers to pick the fruit before maturity and then ripen these with chemicals.  The solution to this problem lies in extending the fruiting season by planting many varieties not ripening at the same time. Unfortunately, this is not happening as every grower wants to plant the most popular variety in his orchard.

Earlier, rows of unripe mangoes were spread on wheat or paddy straw and then covered with a thick cloth or tarpaulin.  In Himachal Pradesh, leaves of a shrub, basootee (Adhatoda vasica), were used in place of wheat or paddy straw. It is said that basootee leaves work better than straw.

Fruits do ripen by this method, but the ripening is not uniform. Sometimes, rotting takes place. This method is almost obsolete now after the advent of calcium carbide.

Bananas are ripened by placing the bunches in a small airtight room.  Smoke is generated by burning grass.  The room is then sealed. The emanating smoke contains ethylene, which induces the fruits to ripen. Ripening takes place in 2-3 days. The room is then opened and the ripe fruits are taken out. The commission agents and wholesalers of bananas in fruit markets have 2-3 such chambers built in their offices. Though this method is still in use, it is not convenient. So, the traders are now shifting to ethrel, which they find user-friendly compared to smoke chambers.

Some chemicals are now being used for fruit ripening. These are the outcome of years of scientific research and are not adulterants.  If fruit growers or traders are using them, they are not indulging in any sort of cheating. The following chemicals are being used at present:

Calcium carbide: This chemical has been in use since long. Almost all mangoes in the world are ripened with calcium carbide. When it comes in contact with water, it releases acetylene, which induces the fruits to ripen. It comes in the form of a grey powder. Mango traders put a small quantity of this chemical in a small paper packet and place it in a box containing fruits. When the water vapours emanating from unripe fruits come in contact with it, it decomposes and starts releasing acetylene. Consequently, the fruits ripen. This process is very slow as the chemical is coming in contact with water vapours, not water. The fruits ripen in the next 2-3 days or by the time they reach their destination.

Industrial-grade calcium carbide is used for ripening. It is said that it might contain traces of phosphorus and arsenic, which are toxic. So, the use of this chemical for ripening is banned in India. But, as there is no suitable alternative, all mangoes sold in the country are still ripened with this chemical.

The traders contest the ban, saying that the chemical is placed in paper packets and it does not touch the fruits. The presence of arsenic and phosphorus in fruits ripened with calcium chloride has not been confirmed by chemical analysis in India. So, its use is going on despite the ban.

Ethylene: Ethylene is a plant hormone. It regulates all functions related to ageing in plants. Its effects on plants include fruit ripening. Ethylene is used commercially to ripen banana, pear and other fruits. Fruits are kept in specially designed gas chambers and exposed to ethylene. This method, though effective, is not easy. It requires specialised equipment and therefore cannot be used on a small scale.

Ethrel: This is 2-chlorothethane phosphonic acid, also known as ethephon. Ethrel is the brand name. It is commercially available as a liquid containing 40 per cent active ingredient.

When diluted, this chemical starts disintegrating and releases ethylene. Usually, the fruits are dipped in 0.005 to .01 per cent solution of ethrel for one to two minutes. During this process, a fraction of the solution enters the fruit. This solution then starts disintegrating within the fruits, releasing ethylene directly within the fruit cells, which induces ripening.  It is another way of providing ethylene to fruits. The excess gas escapes and there is no residue.

Ethrel was discovered in the 1960s and was used in India for the first time on the phalsa fruit in 1971 by this writer at the University of Udaipur during his PhD research. Now, it is being widely used for ripening bananas and for advancing ripening and enhancing the red colour of apples by orchardists.

There is no doubt that naturally ripened fruits are the best. But since fruit-growing is a business and also a source of livelihood for the farmer, some alterations have to be made by him for raising the profitability of his business. So, picking unripe fruits and then selling these later after ripening by using scientific methods is justified.

— The writer is a fruit scientist based at Mandi (HP)