Shimla: Chief Minister Virbhadra Singh yesterday said the final master plan for the development of Shimla and Hamirpur as solar cities had been approved by the Ministry of New and Renewable Energy (MNRE). 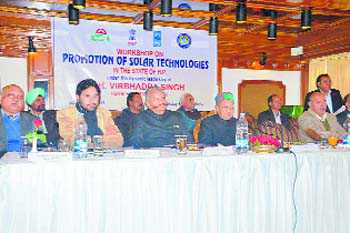 Chief Minister Virbhadra Singh yesterday said the final master plan for the development of Shimla and Hamirpur as solar cities had been approved by the Ministry of New and Renewable Energy (MNRE).

The ministry had sanctioned a 15 kWp solar power plant at Panchayat Bhawan and  two solar plants of the 20 kWp capacity on The Ridge and Old bus stand in Shimla, he added.

Inaugurating a workshop on the promotion of solar technology under the solar city programme organised by HIMURJA here, the Chief Minister said it was essential to tackle the energy crisis through judicious utilisation of renewable energy resources - biomass, solar, wind and geothermal energy.

He said people were being encouraged to install the grid-connected rooftop solar power plants. Shimla was being developed as a ‘pilot solar city’ and the department should work on other projects so as to develop solar cities in other parts of the state, he added.

The Chief Minister said the country was facing acute energy scarcity which was hampering the industrial growth and economic progress.  “It was former Prime Minister Manmohan Singh who launched a national solar mission in 2010 to transform rural India”, he added.

The Chief Minister said Himachal could become a model solar state. They had  notified the revised solar power policy with simplified procedures in January, he added.

He said HIMURJA  had commissioned five small projects at Juthed, Kothi, Lingti, Sural and Purthi of the 900 kw capacity, while four projects of 1470 kw  had been commissioned under the state sector funding at Sarahan, Gharola, Saach, Billing and Bara Bhangal.

Joint Secretary, MNRE,  Tarun Kapoor said solar projects worth 5,547 mw had  been installed till February 2016 and the country targeted to achieve 1,00,000 mw of solar power by 2022. Himachal need to tap Spiti but it need to redress the transmission part, he added.