SRINAGAR: Pakistan’s flags and posters of Hizbul Mujahideen commander Burhan Wani appeared in various parts of Srinagar on Sunday as the Valley remained on edge and under curfew a day before India marked its 70th year of independence. 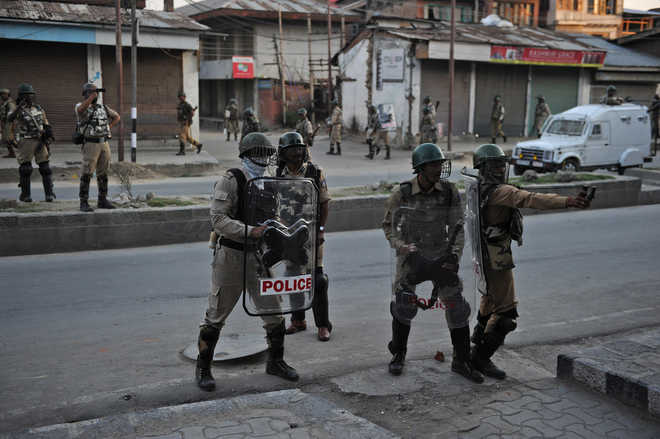 A member of Indian security forces aims a slingshot at Kashmiri protestors during a clash after a day of curfew in downtown Srinagar on August 13, 2016. AFP photo

Pakistan’s flags and posters of Hizbul Mujahideen commander Burhan Wani appeared in various parts of Srinagar on Sunday as the Valley remained on edge and under curfew a day before India marked its 70th year of independence.

Law enforcement authorities later removed flags and posters that were seen in downtown Srinagar as well as Natipora and Pantha Chowk.

This is the first time Pakistan’s flags have been seen flying in the Valley since violence began in the state after Wani was killed on July 8, although protesters have been spotted holding them aloft during protest demonstrations.

Their appearance in the Valley coincides with Pakistan’s Independence Day, celebrated a day before India celebrates its own.

Separatists in Kashmir have called a two-day “referendum march” to Lal Chowk on Saturday and Sunday.

Lal Chowk — a historic location in the city that has traditionally been a place for political meetings — has been cordoned off to stop the separatists, who also plan a sit-in at the location to protest the deaths that had occurred in the protests.

Curfew remained firmly in place in many parts of the city, as well as other major towns such as Anantnag, Pulwama, Kulgam and Awantipora towns in south Kashmir and Kupwara and Sopore towns in the north. Restrictions also continued in other areas of the Valley, officials said.

At least two civilians were injured in new protests and clashes that broke out in Malangpora area of Awantipora in south Kashmir on Sunday morning. Protests were also reported from other parts of the Valley.

Kashmir has been on edge since the killing of Hizbul Mujaideen militant commander Wani in an operation by security forces on July 8. Some 58 people have been killed and more that 6,000 have been wounded on all sides in the protests that followed the killing.