AMRITSAR: Burgeoning population, increasing vehicular traffic, mushrooming hotels and industrial pollution continue to pose a serious threat to the Golden Temple which was earlier too robbed off its sheen due to these factors, forcing the SGPC to replace its gold-plated domes in 1999. 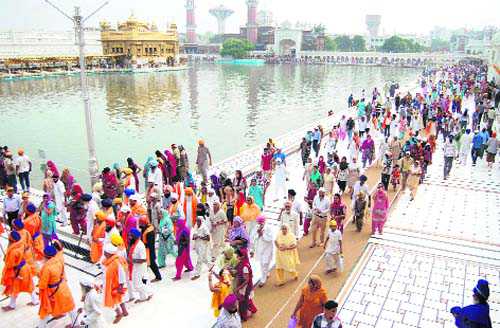 Burgeoning population, increasing vehicular traffic, mushrooming hotels and industrial pollution continue to pose a serious threat to the Golden Temple which was earlier too robbed off its sheen due to these factors, forcing the SGPC to replace its gold-plated domes in 1999.

A World Health Organization (WHO) report says Amritsar is the ninth most polluted city in the country. While the number of private vehicles plying in the area around the shrine is also high, the rickety auto-rickshaws running on adulterated fuel also pose a severe threat to the architectural marvel that the Golden Temple is. Most of these auto-rickshaws are plying without Pollution Under Control (PUC) certificates. Besides, a large number of hotels have come up around the shrine over the last two decades. As per a study on air pollution around the shrine conducted by IIT Delhi, the particulate matter (PM10) concentration breached the National Ambient Air Quality Standards (NAAQS), which was attributed by the study to high background concentrations of PM10 (55.00 µg/m3) within the city.

The study found re-suspension of road dust (47 per cent), followed by industries (31 per cent) as main source of PM10. The study said diesel generators (59 per cent), vehicular exhaust (26 per cent), and free kitchen (12 per cent) were contributing to NO2 emission. Similarly, kitchen (46 per cent) and industries (41 per cent) were main sources of SO2 emission around the shrine. Similarly, as per the PPCB study from January to December 2011, the RSPM level around the Golden Temple had come out to be maximum of 227 and minimum of 124, though it should not be more than 100 microgram/cubic metre around heritage sites. However, the level of sulphur dioxide (SO2) and nitrous oxide (NO2) was within prescribed limits. The high level of pollution is causing harm to miniature paintings and gold plating at the shrine, besides leading to corrosion and blackening of white marble. Its adverse effect can be seen on the gold plating on the outer walls of Akal Takht.

Talking to The Tribune, SGPC Additional Secretary Daljit Singh Bedi said the Punjab Pollution Control Board (PPCB) is yet to install the real time pollution monitoring device to keep a check on pollution level in and around the shrine. He revealed that the SGPC too was initiating measures like reducing the duration of fireworks on occasions like Diwali and modernising the kitchen alongside its langar hall in a bid to curb pollution. Dr Charanjit Singh of the PPCB said they had already placed the order for the device with a France-based private firm and they had given it three months’ time to facilitate the device which will be installed at the Golden Temple Complex.