MUSSOORIE: Rhododendrons (called Burans) blooming in low-lying forest areas have surprised experts but they have come as a boon for children who are making full use of their school winter vacation by collecting flowers and selling them to tourists on roadside near Kempty. 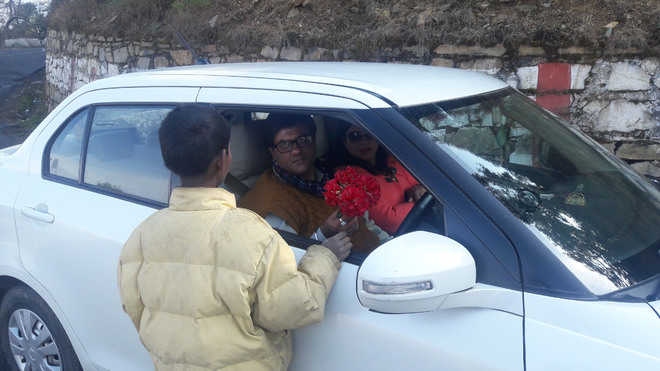 A child from a village near Kempty sells rhododendron flowers that have bloomed early to tourists in Mussoorie on Tuesday. Tribune photo

Rhododendrons (called Burans) blooming in low-lying forest areas have surprised experts but they have come as a boon for children who are making full use of their school winter vacation by collecting flowers and selling them to tourists on roadside near Kempty.

Karan, 12, a student of Government School, near Happy Valley, is elated at the early blooming of rhododendrons this year. He wakes up early in the morning without having to worry about attending the school and goes to the forest to collect rhododendron flowers. He sells the flowers to tourists for Rs 30 to earn pocket money.

This year, Karan and his friends are able to collect a large number of flowers and sell these at a nominal price to tourists. Rhododendrons bloom around February and March but this year they have bloomed quite early to the delight of all schoolkids. In March and April they have to worry about their studies as their schools remain open and they collect less number of flowers. This year, rhododendrons have bloomed in January and they can devote more time in collecting and selling these to tourists, adds Karan. “We wish that the flowers bloom in January when we have school vacation,” says Karan’s schoolmates accompanying him.

Agriculture and forest expert Kundan Singh Panwar says climate change can be one of the reasons for the early bloom of rhododendron flowers this year. Trees such as apple and apricot shedding leaves during the winter and experiencing flowering early can be attributed to climatic change, as for the past four months the area has not witnessed rains and the temperatures have been comparatively higher in December and January. This premature flowering is not good for the flower as the dry conditions will lead to less juice content. The absence of snowfall this year so far will also affect the flowering process, says Panwar.

Tehri Garhwal District Horticulture Officer Amar Singh says branches that matured but did not flower last year have bloomed much early in January this year due to the temperature suitable for their growth. The Horticulture Department has set up food processing centres in the district where people can process juice of rhododendron flowers, which is said to be good for curing heart ailments. Rhododendron is also the state tree of Uttarakhand and contains several medicinal qualities, he adds.