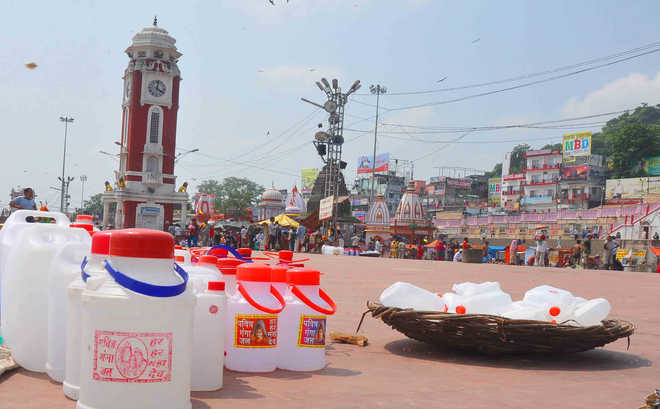 The saint community has expressed resentment over the Union Government’s move to sell holy Ganga jal through post office bookings. They have warned of resorting to intense agitation.

Many renowned saints have demanded that the government should roll back its decision, terming it an act that hurt religious sentiments of saints and millions of devotees who regard the holy Ganga jal as pious.

The governing body of the Akhil Bharatiya Akhada Parishad has expressed displeasure over the government’s move.

Spokesperson for the Akhada Parishad Baba Hatyogi said people worship the Ganga and its water was used in religious rituals. It was sacred, not a commodity to earn revenues or be put on sale. If Ganga jal was sold, it would have serious ramifications, he said.

Bhooma Peethadeeshwar Swami Achutyanand Maharaj termed the Ganga as the identity of the country and questioned the idea of selling the holy water.

“On the one hand, Prime Minister Narendra Modi and Union Ganga Rejuvenation Minister Uma Bharati spoke highly of the Namami Gange scheme to clean the Ganga and its sub-tributaries, simultaneously, they are trying to sell the water of the pious river,” he said.

Jai Ram Ashram spiritual guru Brhamaswarup Brahamchari called the move another proof of using religion and related aspects to garner power. He said first the BJP ignited people’s sentiments over the construction of Shri Ram Temple in Ayodhya, which it seemed to have put on hold to ensure that it remained in power. Now, it was trying to commercialise Ganga jal, which was no ordinary water but was regarded as having properties of nectar.

Warning the Union Government of the fallout of selling Ganga Jal, Hari Har Ashram head Mahamandaleshwar Swami Harichetnanad Maharaj said the holy Ganga was one of ‘panchamrit’, in which nectar fell during the war between deities and demon. Selling its pious water would only bring curse, he stated.

The Ganga Sabha, which manages the affairs of the sanctum sanctorum of Brahma Kund, Har-ki-Pauri, has also opposed the move.

“People go to temples for worshipping, so is the case with the Ganga river, where devotees arrive to take a holy dip and fetch Ganga jal. Selling it through post offices or online does not augur well for the religious faith of the people. The Ganga is regarded as a living deity, how can we think of selling it or purchasing it,” Gandhivadi said.

Swami Hansdevacharya has also warned the Union Government that if it went forward with the online sale idea, saying that the saint community and religious organisations would not allow this to happen.

Congress Mahangar unit president Anshul Shrikunj has also opposed the Ganga jal sale scheme. It was a disrespect to Mother Ganga, who was regarded as a deity having immense spiritual, medicinal properties and a river providing salvation, he added.