Sheroes, the stars with acid scars : The Tribune India

Sheroes, the stars with acid scars

It took 10 seconds at the most, a flick of the wrist and her life turned topsy-turvy, forever. 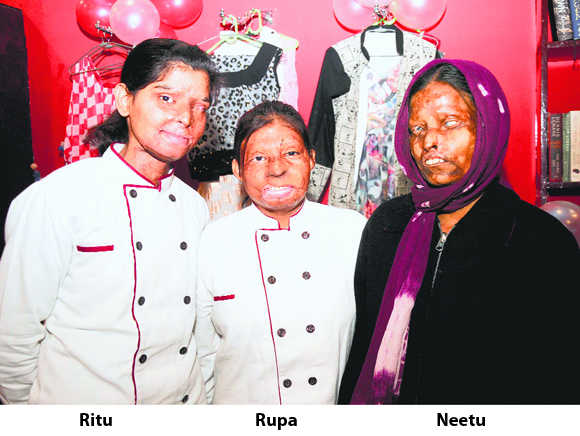 It took 10 seconds at the most, a flick of the wrist and her life turned topsy-turvy, forever. The corrosive liquid ran down her soft skin, burning deep, leaving indelible, inerasable marks on her face, her body, her soul. The pain was unparalleled, unimaginable. Acid melts the flesh and, at times, also the bone.

What followed was the worst bit — pitiful, even horrified, glances, followed by social stigma and rejection.

Nineteen-year-old Ritu often wonders why no one among the crowd which had gathered to gawk at her writhe on the ground right in the middle of a busy road in Rohtak that fateful day come forward to help her. “Onlookers crowded around as I lay squirming in pain. No one came forward to help. Maybe if someone had immediately taken me to a hospital, my eye could have been saved,” she says.

“Even the lady doctor in Delhi (the victim of the latest acid attack at the hands of a jilted lover) kept crying for help for long… we saw the video,” Ritu adds angrily. But no one knows when a jilted lover will decide to teach a lesson for a lifetime to the person he claimed to love, or when a close relative will decide to scar the face of a teenager in a revengeful act against her parents, or when a father will pour the searing liquid on his own off-spring on a night he has had one too many.

Invariably a premeditated crime, acid attack easily classifies as one of the most vicious forms of hateful revenge.

Punishment, if any, is hardly compensatory to the loss and pain. In fact, in many cases, the attacker manages to get away without any. The fact is that a chemical attack seldom kills. But it disfigures and devastates the victim’s life in every possible way — mentally, psychologically, physically and financially. According to activists working with acid attack survivors, even if they do manage to get immediate medical help, which is rare, many remain disfigured for life.

As time passes, the physical pain may dull, but it never really goes away.

Acid violence is a global phenomenon but it largely occurs among the not-so-well-off and specifically against women. The worst part is that instead of offering support, often the society shuns them. “I have seen horrified mothers covering their children’s eyes,” says Rupa, another acid attack survivor. They are held responsible for what happened. Says Neetu, another braveheart survivor: "My mother (Geeta is also an acid attack survivor) is often asked what she did to provoke her attacker, my father.”

Strangely, instead of the attacker being punished or banished, they are cast out into a dark corner, face covered and invisible to the world. “I used to cover my face even inside the house,” says Ritu, who suffered at the hands of her stepmother. In many cases, like that of Lakshmi, the founder-member of Chhaon Foundation and the campaign “Stop Acid Attacks”, the attacker even tried to move on and got married while on bail. Currently, he is behind the bars though.

It may look small, but change has started to happen. The Sheroes’ Hangout in Agra, a unique concept initiated by the campaigners, is a heartwarming story of the significant transformation that is taking place in the lives of these young girls and those responsible for putting it together (see below). Ritu, Rupa and Neetu no longer hide their faces. They wear it like a medal, smiling proudly and confidently. They pose for our camera in front of the “selfie point” outside the café. “Why should we hide our faces? What have we done?” Neetu questions, smiling.

Disfigured at the age of three by her own father, she can barely see. But the courage and hope that lights up her face makes her beautiful, again.  Ritu, Rupa and Neetu — three girls with stories so similar, yet so different. Often, acid attack survivors are charged with provoking their attackers. It is strange because the pain inflicted upon Ritu, Rupa and Neetu was caused by a close relative. The acid thrown on them shattered their lives, but they refuse to break. The Sheroes, our heroes.

Hear her speak and you will feel as if you are talking to a typical teenager, bubbling with energy. The anger, the hurt inside has left the spirit unscathed. Clearly the life of the Sheroes’ Hangout, she flits in and out, helping with orders and managing the counter. Ritu is from Rohtak (proper city, she says) in Haryana.

May 26, 2012 is etched in the 19-year-old’s memory. The attack was engineered by her bua to settle a property dispute with her parents.  “My aunt Rajwanti wanted to target my parents. Why did she destroy my life I don’t know, what had I done?” Ritu is still trying to look for answers.

Even after what she had done, the bua wanted her parents to “sort out, settle” the matter. “Can anything, any amount of money bring back my face and my dreams? I used to play volleyball. Now look at my life. I have already had six surgeries and need many more before I can go for plastic surgery, which is a very expensive. Even after that, things will never be the same again.”

Ritu’s left eye is completely damaged. “Had someone helped me that day, my eye could have been saved. I appeal to people to help those in distress. Don’t just stand around discussing kyon, kaise.”

She was wearing a red dress that day. “It was a colour I had never worn before.” In the days that followed, the colour became a nightmare for her. “On May 26 last year, Lakshmi didi celebrated the day by making me wear a red dress designed by Rupa didi,” she says.

She has a question for the authorities — is anyone adhering to the Supreme Court ban on the sale of acid? The attack on Ritu involved 18 persons. Three convicts got a life term and two a 10-year term, she says.

Ritu dreams of becoming a painter. On what’s next, the teenager offers: “Let life settle down first.”

Rupa: Dress designer in the making