ROHTAK:A local court today discharged all three boys accused of molesting two Sonepat sisters — Pooja and Aarti — on board a bus in November 2014. 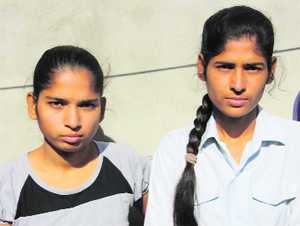 Aarti and Pooja, who thrashed three boys in a moving bus. FILE

A local court today discharged all three boys accused of molesting two Sonepat sisters — Pooja and Aarti — on board a bus in November 2014.

The court of Additional Chief Judicial Magistrate Harish Goyal discharged Kuldeep, Mohit and Deepak as no charges were made out against them. Their  counsel Pardeep Malik said they were considering filing a defamation suit against the girls.

Girls’ lawyer Attar Singh Panwar, however, said they would challenge the judgment in the High Court.

The two sisters of Thana Khurd village in Sonepat district had thrashed the three boys of Aasan village in Rohtak district aboard a bus, accusing them of molestation. They also lodged a police complaint, following which the boys were arrested.

The boys, however, maintained they had not molested the girls and the real issue was getting a seat vacated for an elderly woman, which triggered an altercation. The boys were later released on bail.

A special investigation team charge-sheet indicated that none of the 40-odd witnesses supported the sisters’ version.

The boys came out clean in the polygraph test too.