The shrinking Wular lake a matter of concern : The Tribune India

The shrinking Wular lake a matter of concern

SRINAGAR: All is not well with Wular Lake in north Kashmir’s Bandipora district, one of the largest fresh water lakes in Asia, which has been identified as one of the 26 Ramsar sites in the country. 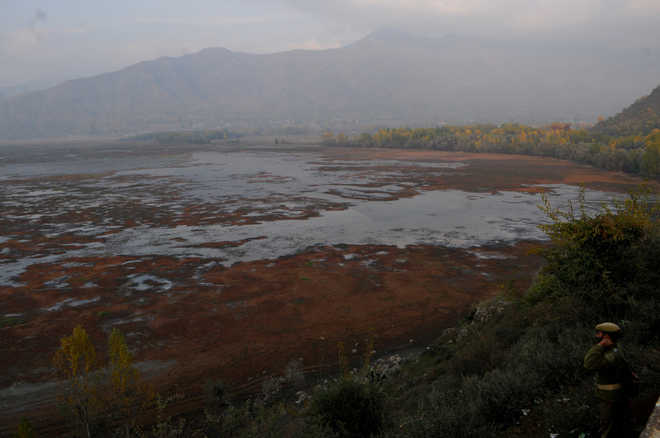 The fast-vanishing lake is located 34 km north of Srinagar

All is not well with Wular Lake in north Kashmir’s Bandipora district, one of the largest fresh water lakes in Asia, which has been identified as one of the 26 Ramsar sites in the country. Over the past many decades, it has suffered heavily due to siltation, conversion of 40 per cent of the lake area into agricultural land, pollution from fertilisers, highly degraded catchment area and encroachment along its banks.

These factors have reduced the size of the lake from 157 sq km in 1911 to 86 sq km in 2007. The lake, according to experts, needs dredging, de-weeding, de-silting, embankment and rooting out of trees to restore its original space, which require huge funding.

The cost of the project was estimated at Rs 386 crore. The Centre agreed to provide only Rs 120 crore for the project and only Rs 60 crore had been provided so far. Work on the project was started in 2012 for a period of four years, ending March 2016, according to officials.

“It needs sustained conservation efforts to make the project successful and achieve its objective. Nothing is known about the fate of the project later,” said Mian Javed, Chief Executive Director, Wular Conservation and Management Authority (WUCMA). “The main concern is that it should go on uninterruptedly. Wular revival is of paramount importance,” he said.

Ahead of the completion of four years of conservation and preservation with nominal funds, the state government is looking forward to “ensure uninterrupted funding to accomplish the remaining operations”. Reviewing the Wular project on December 16, 2015, Chief Secretary BR Sharma asked the Forest and Environment Department to submit a proposal for requirement of funds to continue the Wular conservation and preservation project.

The Chief Executive Director of WUCMA pointed out that Wular conservation and preservation needed to be linked with the comprehensive flood mitigation plan of the Jhelum, saying the results were evident during the September 2014 floods. He made it clear that a deeper lake with greater capacity and speedy flow of flood waters into it would ensure lesser flood threats in the Valley.

“The capacity to hold water in the Wular Lake has been reduced, which needs intensive dredging,” he said. He disclosed that as per the plan, 26.5 lakh cubic metres of silt had to be dredged out from the lake and its immediate associated wetlands and marshes. He said 10 lakh cubic metres had been removed till the end of November last year while 2.5 lakh cubic metres would be removed by March this year. “This raises water-holding capacity by two metres of depth,” Mian Javed said.

“The lake has a highly degraded catchment area through which the main tributaries, Nullah Erin and Madhumati, drain out into the lake,” said Mian Javed. “The degraded areas need intensive afforestation,” he further said.

He held that short-term and long-term measures were being taken to upgrade around 1,220 hectares of forest land. He said 507 hectares had been covered so far, in which 3.5 lakh plants had been planted. The remaining 713 hectares would be completed by March, in which 6 lakh trees would be planted in the two watersheds, the officer said.

A major portion of the lake touches Bandipora district from Hajin to Watlab on its western coast, where live a majority of the 80,000 people who depend on the biodiversity of the lake. They depend on the lake to earn from fish, water birds, chestnut and “nadroo” (lotus stem).

“If immediate measures are not taken to preserve the lake, it will die and lead to an environmental imbalance,” said Usman Majid, Bandipora MLA. He lamented that a meagre amount of Rs 60 crore had been provided for the conservation and preservation project.

“A lot has changed over the decades,” said Parvez Masood from Bandipora, looking back to his youthful days three or four decades ago. The water level and its colour had changed, he pointed out. The water level was close to Nadihal village, where a high school was located then, he recalled.

He added that the level had receded even in summer. The water had turned red, maybe due to pollution, as one looked to the lake from the road leading to Srinagar, he lamented. Natural produce from the lake like fish, birds, chestnut and “nadroo” were not available in abundance, unlike in the past, he lamented. He hoped that its past glory was restored.