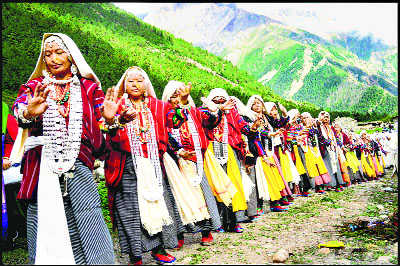 Women from the Rang tribal community participate in the Kadali festival in Dharchula subdivision of Pithoragarh. Photo: Ritu Gupta

It's a 4,000 years’ long history of traditional festivals in Kumaon. Fairies and lore were at the bottom of these festivals. These were the occasions when tribals or village folk gathered to celebrate, feast and pray. These traditional feasts and festivals are not lost and are still honoured in observance. Rustic feasts on the cool green ground or in the woods or by a riverside are still happening. These festivals are not a baggage of the dead generations and are rather a repository of encoded knowledge about people of the yore, their culture, beliefs and practices.

As an ancient society, Kumaon has a long tally of festivals that were celebrated by mainstream and tribal communities. The mainstream society of Kumaon is considered over 4,000 years’ old that settled after the Khas tribe arrived from mid Asian mountains. The traditional festivals  have the influence of the Khas tribe, which has now merged with other communities.

The festival of Anthon or the eighth day of Bhado month (September) is largely celebrated in eastern  Kumaon.  On this day, village women worship Lord Maheshwar and Goddess   Gaura  and solemnise their marriage by making their statues of grass collected from their fields. Married women are invited specially to take part in the ceremony and are offered delicious meals and clothes by their parents. “Before  raising the statues of Shiva and Parvati on Saptami, we begin the  festivities on Panchami by drenching  seven grains that  are used in worshipping the deities on Ashtami. Village women sing cultural songs and perform dances for the next few days after Ashtami as if they are getting married,” says  Bhaga Devi,  a resident of Lunthura village of Pithoragarh. Anthon is considered a sacred occasion for married women as they put a sacred thread on their left arm as a symbol of prosperity of their families.

Syalde Bikhoti is one of the oldest and famous festivals of the  Pali  Pachaun area of  Almora district. The preparations for the festival  start one month ahead of Bishuwat Sankranti in all villages of the Pali Pachaun area of Almora district. Villagers take a bath  at the Sheetla Mata temple at Dwarahat and the festival  concludes at the Shiva temple at Bibhandeswar at   the Dwarahat market in Almora. People in every village of the area make preparations for the fair which not only showcases rowdiness of old clans but also sacred powers of the water of a tank near the Sheetla  Mata temple. It is believed the tank water bestows benefits equal to the  bath on the confluence of  the rivers in Bageshwar  on Uttarayani. “The festival concludes with the tradition of Oda Phetna (touching the stone at the place where the head of the rival group leader was cut   in the ancient times),” said Charu Tiwari, a resident of Dwarahat.

The Ghrit Sankranti (Olagia) festival is celebrated for farm prosperity in Kumaon on the first day of Bhado month (middle of August). It is the time in the hill region when the  harvest is lush green, vegetables are  ripe and  milch animals are  highly productive. Villagers eat chapatis stuffed with Urad dal (black gram)  paste and baked with ghee smeared on them. This tradition reflects the prosperity of an agrarian society. “In old times, sons-in-law used to  give gifts to their fathers-in-law  and agricultural artisans used to gift the best of their preparations to their landowners and  receive  gifts in return from them. Local landlords in the middle ages also used the occasion to collect gifts from their   subjects on this day,” said Laxmi Devi, a resident of Kumaiya Chaur village near the town.

Phuldei was celebrated in the region even before the Aryan Brahmins arrived in the 11th century.  The festival is celebrated in Kumaon in the month of Chaitra (mid March). Kumaon people regard the occasion as the beginning of New Year as flowers sprout and the spring season sets in.  To bless households on the occasion of New Year, unmarried  village  girls collect  rice,  oil and  money as gift from each household  in return for blessings of prosperity next year. Girls prepare products from the collected material   and  distribute it as prasad.

The Harela festival is celebrated by farmers in Kumaon on Sankranti, the first day of Srawan month (mid July). On the occasion of Harela, local farmers sow seeds of several cereals. The   seeds are   sown in a cleaned  pot that is put in a corner of the house before Srawan Sankranti, on which Harela is harvested  and  put on the head of each member of the family. It is believed Harela  leaves, put on heads, bring  good  health and prosperity. “Women in the house prepare delicacies and a family feast is organised in which married daughters are invited,” said Laxmi Devi, a resident of Kuaiya Chaur village in Pithoragarh district.