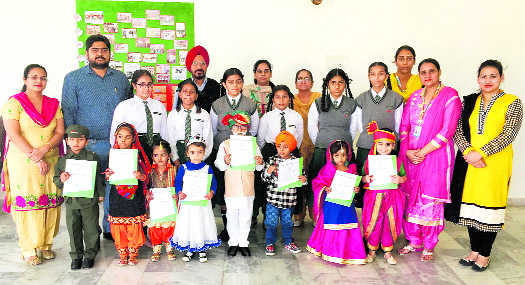 Ludhiana: Carrying forward with its civic project ‘I Change My City’, students of BCM Arya Model Senior Secondary School, Shastri Nagar, took part in a traffic-awareness activity in Haibowal, Ward No. 31, in collaboration with the traffic police, Ludhiana. Dhruv Dahiya ADCP (Traffic) was also present with his team to motivate students. Students helped the traffic police constables in regulating traffic and implored the general public to follow traffic rules. Pamphlets with information and tips on safety rules were also distributed to the passersby and shopkeepers. ‘Smart citizen’ stickers were awarded to motorists who were seen following traffic rules and those who were not following traffic rules were stopped by students and requested to follow it. Dahiya appreciated the sincere efforts of students for taking up such a drive to make the general public aware about traffic safety and exhorted them to be responsible citizens. Certificates would be awarded to all students who took part in the drive by the Ludhiana traffic police.

The 11th recreational meet was organised at KVM, City Campus. The event was organised to emphasise the importance and role of games and sports in children’s growth. The chief guest said it was necessary for parents to explore the interest of children so that they are able to provide wings to their talents. Children participated zestfully in various events. A colourful cultural show was also exhibited by school students.

The students of Ryan International School celebrated Children’s Day with enthusiasm. A special assembly was conducted by teachers where they danced and presented a skit depicting moral values.