Why Buta Singh must protest again : The Tribune India

Why Buta Singh must protest again 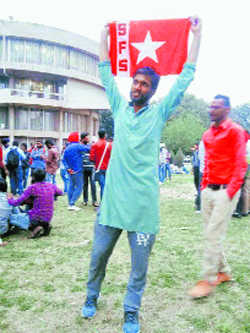 You might have hired him from one of the city’s labour chowks. Those living in Sector 15 or 16 might be getting their newspaper from his hands. Art lovers must have seen this young fragile man selling books outside Punjab Kala Bhawan or Tagore Theatre. Some day, he might have served you as a waiter too.

Meet Buta Singh, accused No. 10 — accused of culpable homicide. He is one of the around 70 students who “tried to kill the policemen intentionally” during Tuesday’s protest at Panjab University. A day later, he was barely able to walk.

Buta was singled out and instead of any police station, he, along with another student, was taken to Chandigarh Police’s crime branch. The treatment he was given — be it beating him so hard that three sticks gave in, using belts or hurling casteist abuses — are now part of court proceedings.

Before becoming an accused, Buta Singh, in his early twenties, was trying to self-fund his fundamental right to education, sometimes acting as a waiter, sometimes as a bookseller, sometime as a daily-wager and sometimes as a newspaper vendor. He was slogging to earn the right that the university authorities as well as the Union government are consistently trying to deny him.

Students like Buta are a phenomenon which had died long back on campuses in Punjab. It died much before students started riding in SUVs, much before the ‘brand consciousness’ had arrived.

And today, when universities are known by packages and vice-chancellors boast of campus placements, they rarely talk about the knowledge the universities are producing. Enamoured by utilitarian thought, they have forgotten: “A university stands for humanism. For tolerance, for reason, for the adventure of ideas and for the search of truth. It stands for the onward march of the human race towards ever higher objectives. If the universities discharge their duties adequately, then it is well with the Nation and the People.”

Buta has often asked the same questions: do universities in these times “discharge their duties adequately”?

Did the son of a Dalit farm labourer from a village in Punjab’s most backward district of Mansa have any other option?

His childhood friend Harbhajan Singh, who is from the same village of Khiva Dialu Wala, tells he is very fond of studying. That is why back in the village, he resisted his father’s idea to drop out of school. Instead, he started going for “dehari” on Saturdays and Sundays as well as during summer breaks. But he had to succumb; he had to choose work over education and dropped out of class ninth. He started making shoes with his father and later worked as a daily-wager. Two years later, motivation and financial help by a friend brought him back to school.

Someone told him to go to Chandigarh; there he would have ample opportunities to work and study. He would tell his friends about his dreams, that he will achieve at PU what he couldn’t do in his village.

It was the same dream that landed him with the crime branch on Tuesday. Some called them professional protesters, some called them disruptors, the vice-chancellor called them a handful of people; the police and university authorities first termed their act seditious, and later backed out.

Sadly, none has bothered to ask: why was Buta ready to brave water cannons? Why didn’t the police cane scare him? Why was his fragile body ready to face third-degree torture?

Did he have any other option?

Even if he did, why shouldn’t Buta Singh protest?