Will real-estate be happening in Haryana? : The Tribune India

Will real-estate be happening in Haryana?

The state government’s resolve to go ahead with the Happening Haryana Global Summit despite the widespread arson and violence witnessed during the recent agitation for grant of reservation to Jats seems to have achieved the desired results. 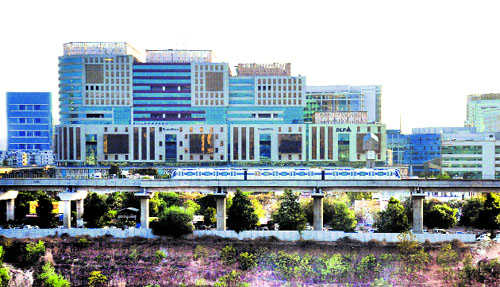 The state government’s resolve to go ahead with the Happening Haryana Global  Summit despite the widespread arson and violence witnessed during the recent agitation for grant of reservation to Jats seems to have achieved the desired results.

According to the state leadership’s own submission, the Haryana government signed as many as 357 MoUs worth total investment of Rs 5.84 lakh crore, which was five times more that the government's own expectations.

A heartening news for the investors and others connected with the property market is that an investment of nearly Rs 1.60 lakh crore of the total projected investment happens to be in the real-estate sector.

The major players among the 22-odd real-estate companies that have signed MoUs with the Haryana government include M3M, Vatika, Ireo, Omaxe, Jindal Realty and Puri Constructions.

M3M Group was the largest investor by signing three MOUs accumulating to Rs 45,365 crore at the investor’s summit

Out of this Rs 9000 crore would be spent for development of large clusters of Low Income Housing to be constructed to fulfil the vision of Housing for All- A Part of the ‘Pradhanmantri    Aawas Yojna’.

Rs 8000 crores towards development of development of other real-estate projects and Rs 26,000 crore to be invested in building a new smart city in Gurgaon envisioned to become a model for “smart city” concept for the nation

Supertech Limited, that signed an MoU will be investing Rs 5,706 crore in the state. Under the terms of the agreement, Supertech will develop affordable housing and township projects,

Market observers maintain that if the real-estate projects showcased during the two-day conclave organised at Gurgaon on March 7 and 8 get materialised, it would be a big shot in the arm for the sagging property market in the state of Haryana.

“The MoUs signed by the real-estate companies, along with the government’s move to establish Real-Estate Regulatory Authority, promises to revive the property market in the state, provided the state authorities effectively streamline the official procedures and ensure transparency. This will go a long way in building confidence amongst the investors and assuring the builders of sound returns,” observes Santosh Sinha, a real-estate analyst.

Market experts emphasize that the state government should take positive initiatives in ensuring that the promised projects get materialised on ground within a specified time frame.

During the conclave, Haryana Chief Minister as well as numerous Union Ministers pledged proactive support to the mission envisaging extensive infrastructural, industrial and socio-economic development in the state.

While Union Finance Minister Arun Jaitley maintained at the summit that Delhi was saturated and Haryana stands to benefit due to its spill-over to the NCR, Haryana Chief Minister Manohar Lal pointed out that MoUs involving an investment of Rs 1,28,000 crore were meant for the non-NCR districts as well.

On the other hand, Union Minister for Urban Development Venkaiah Naidu stated that two Haryana cities Karnal and Faridabad had been selected to be Smart Cities, while 18 other cities would be covered and funded under the Atal Mission for Rejuvenation and Urban Transformation (AMRUT).

Union Railway Minister Suresh Prabhu said they would take the Rail Coach Factory project forward, while Union Minister of State for Petroleum and Natural Gas Dharmendra Pradhan asserted that the Panipat refinery would be developed to the next level.

Union Defence Minister Manohar Parrikar also urged the entrepreneurs to consider investing in Haryana, which, he said, was the preferred destination for industrial investment by virtue of its proximity to the national capital, technology, skills, hard-working workforce, better connectivity and environment mechanism.

The industry captains , too, seem upbeat over the growth prospects. Adi Godrej, Chairman, Godrej Group, stated: “We have seven real-estate projects in Haryana and look forward to have more in the near future. We are very optimistic about our real-estate

Rajiv Singh, vice-chairman, DLF Ltd, asserted that and they were convinced that the state of Haryana is entering an unprecedented era of development. “We will invest more than Rs 20,000 crore in the next 5-10 years,” he added.

Harinder Dhillon, senior vice-president (sales), Raheja Developers, said the overall infrastructure development in the state would ultimately translate into positive prospects for the real-estate sector which is facing a slowdown as of now.

“The commissioning of the Manesar-Palwal section of the KMP project will also boost the property market in the Gurgaon, Sohna, Dharuhera, Faridabad and Palwal belt. The successful completion of the Dwarka Expressway will also brighten the prospects of the realty industry in the Gurgaon zone,” he added.

Sudhir Rajpal, the Managing Director of the Haryana State Industrial and infrastructure Development Corporation (HSIIDC), affirmed that a system of fast-track clearances had been put in place to do away with the procedural bottlenecks.

“The developed land out of the existing land bank will be made available to the signatories of the MoUs to ensure early implementation of these projects," he said, adding that Relationship Managers had also been appointed to convert the MoUs into actual on-ground investments.

Rajpal further disclosed that in order to attract more investments, the HSIIDC had started a system of online geo-referenced display of its industrial estates to provide information about the availability of vacant plots at the click of mouse.