LUDHIANA: A 48-year-old woman died after she was allegedly pushed by a bank guard outside the Punjab National Bank on Shingar cinema road on Thursday. 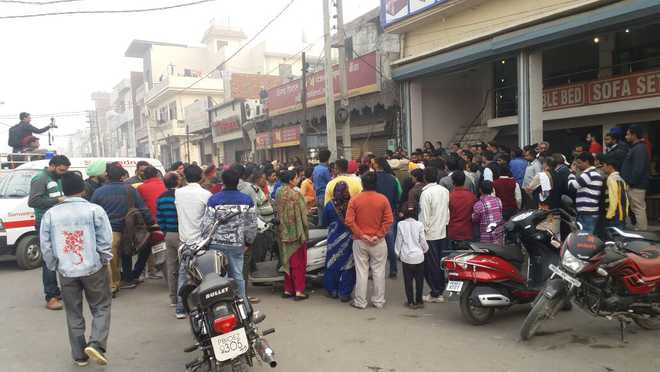 Following her death, her kin brought her body back outside the bank and blocked the Shingar cinema road. Tribune photo

A 48-year-old woman died after she was allegedly pushed by a bank guard outside the Punjab National Bank on Shingar cinema road on Thursday.

The deceased has been identified as Asha Rani, a resident of Charan Nagar on Tibba road. She had come to withdraw cash from the bank.

Her son Parvinder said her mother had been visiting the bank from the past four days but due to the rush or lack of cash was not able to withdraw money.

“Today she was standing in the queue since morning. There was a huge rush outside the bank. The bank guard allegedly pushed her when she tried to enter the bank. She fell down near the main door of the bank and fell unconscious,” Parvinder said.

Following her death, her kin brought her body back outside the bank and blocked the Shingar cinema road.

Protest was on outside the bank for over two hours.

Shutter of the bank was closed. Some bank staff is also reportedly inside the bank.

Sources said the bank manager also came out to pacify the crowd but he also faced the wrath of the public.

Family members said they would not take the body for post mortem examination till the police took action against the guilty bank guard.

Till the filing of this report, the road is still blocked.

Sources said the marriage of the woman’s daughter was due on February 28.