NEW DELHI:Three persons, including two women, died and 12 were rescued in a major fire that broke out today at a rubber factory in Delhi’s Jhilmil industrial area. 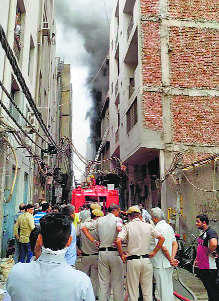 Fire tenders in the Jhilmil industrial area of New Delhi on Saturday.

Three persons, including two women, died and 12 were rescued in a major fire that broke out today at a rubber factory in Delhi’s Jhilmil industrial area.

Chief Minister Arvind Kejriwal has announced a compensation of Rs 5 lakh to the families of the victims.

The bodies of the victims were recovered from inside the factory and sent to the nearby GTB Hospital, where they were declared dead by doctors. Deputy Commissioner of Police (Shahdara) Meghna Yadav said the deceased had been identified as Shoeb, Manju and Sangeeta.

Twelve workers were working when the fire broke out and were rescued by the Delhi Police with the help of fire officials from inside the factory, the DCP said.

Fire officials came to know about the flame around 9:25 am. Initially, 10 fire tenders were rushed to the spot.

The police lodged a FIR against the owner as no fire extinguishers were installed inside the factory and many inflammable goods were stocked there, jeopardising the lives of labourers, the police said.

The cause of the fire is not yet known and an investigation is being carried out in this regard. Despite being an industrial area, there are several residential buildings located near the factory.

In a similar incident in January last year, 17 persons, including 10 women, had died in a massive blaze at a firecracker storage unit in the outer Delhi’s Bawana industrial area. Yesterday, a fire had broken out in an operation theatre of the government-run Employees State Insurance Model Hospital at Basai Darapur.