JALANDHAR: Hundreds of farmers of Wattanawali village alone, six kilometre from Sultanpur Lodhi, would attend the fair for the Gurpurb celebrations until last year. 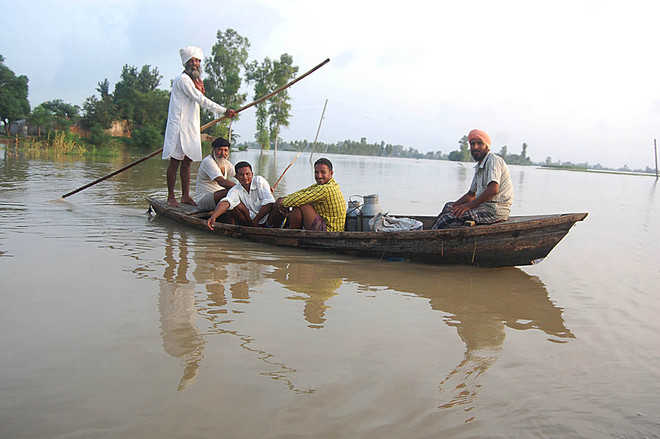 Hundreds of farmers of Wattanawali village alone, six kilometre from Sultanpur Lodhi, would attend the fair for the Gurpurb celebrations until last year. However, following paddy crop loss due to the floods this year, farmers of 13 villages in this belt have no money (for promised seeds and manure) for the upcoming wheat sowing season, dampening their Gurpurb spirit.

Jinder Singh, a farmer of Wattanawali village who lost paddy on 20 acres to the floods, says, “If hundreds of residents from the 13 affected villages went to attend Gurpurb in the past years, this year there will be a drastic fall in the number of farmers from the affected villages going to attend the fair. When farmers do not have money, how can they go for the celebrations. I lost my paddy crop on 20 acres of land for which I have yet to receive compensation. The wheat sowing will begin in a week, but I have neither seeds nor manure. The free seeds for the wheat crop, promised to be given by the Agricultural Department, have not arrived yet. Overwhelmed with lots of worries, how can farmers go for the Gurpurb celebrations.”

Sarwan Singh from Baupur village in Kapurthala said, “Villages affected by floods are very close to Sultanpur Lodhi. They were the main villages which would organize langars and celebrations. In the last few years, hundreds of farmers would flock to Sultanpur Lodhi well ahead of the Gurpurb. In the five days preceding the Gurpurb fair in November, farmers will still visit this year also as it is a matter of faith. But steeped in debt, many will be going with a heavy heart.”

Sarwan added, “Villages from the Majha have pitched in with help and a lot of help from sangat of other areas is also arriving to ensure that people put in their bit for the celebrations. However, the 550th-year celebrations will certainly dampen the spirits in the affected villages due to huge losses, debts and lack of compensation so far from the government.”