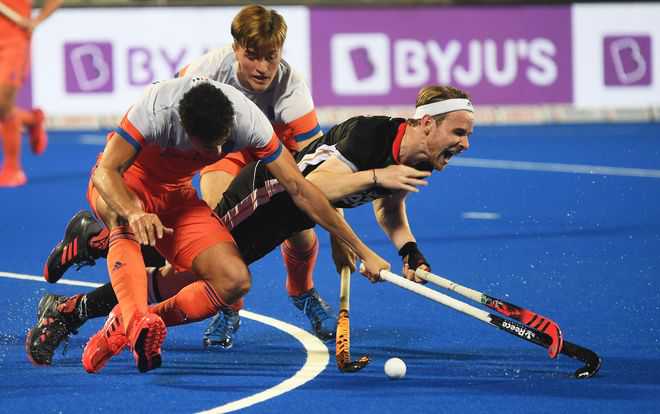 Germany’s Christopher Ruhr falls on the ground as he tries to dribble past Netherlands’ Jorrit Croon during their group stage match in Bhubaneswar on Wednesday. AFP

TWO very different rivalries, set apart by thousands of miles, saw two distinct battles fought out on the same day in Bhubaneswar. First up on the blue turf were European big guns Germany and Netherlands. Against all expectations, the neighbours ending up adding another thrilling chapter to their age-old rivalry. It was not expected to be a German night, the two-time champions not being at their best in the last few years, thus slipping to sixth in the world rankings.

The Dutch, two places above Germany, were the fancied side on Wednesday. However, a draw was a more plausible prediction. Neither team likes to lose this encounter. And history has shown that despite the difference in rankings and form, the weaker team has found a way to play out a draw.

The match seemed heading that way again, until Germany suddenly found their scoring touch, eight minutes before the final hooter. The first half had the Netherlands running all over Germany. The all-black Germans were pressed into making uncharacteristic mistakes. They gave away too many balls in the midfield. The Netherlands counterattacked but it took them 13 minutes to take the lead. Valentin Verga’s cross from inside the circle went in off German defender Lukas Windfeder’s stick.

The determined Germans, though, fought back and almost got the equaliser in the last seconds of the first quarter. A penalty corner variation saw a strike by the pusher hit the near post.

The Dutch enjoyed even more dominance in the second quarter but looked a little slow in the circle, missing many chances. That, in the end, proved to be the difference. Germany won another penalty corner, again seconds before a break. They went for the same variation and it worked this time, Mathias Muller getting the crucial deflection despite being off-balance.

Every battle between the two European teams is fantastic to watch from the tactical point of view. Both play sound hockey, but it’s the small things that make the difference every time. At different times in a highly-competitive second half, each team had the upper hand. While the Dutch failed to score when they were mentally on top, the Germans made the domination count. Windfeder made up for his mistake with a 52nd-minute drag-flick goal. Marco Miltkau got an opportunistic deflection two minutes later, and Christopher Ruhr converted a penalty stroke two minutes from time. The win sealed the top spot in the pool for Germany as Pakistan and Malaysia played out a draw in the second match of the day.

In the all-Asian battle of the day, Malaysia and Pakistan played out a chaotic draw to stay alive in the competition. The match started out at hectic pace with end-to-end action, but it fizzled out as both teams lost steam. The excitement returned when Pakistan thought they had sealed the match with a 51st-minute strike from Muhammad Atiq. But Faizal Saari equalised with a 55th-minute drag-flick. With one point each from two games, both teams have a chance to finish in the top-three.

Hoping to inspire the current team, India’s World Cup winners from 1975 were felicitated before the start of the event in Bhubaneswar. They were honoured during the opening ceremonies, in Bhubaneswar and Cuttack, and were the state government’s guests for India’s opener against South Africa. On Wednesday, another World Cup winner was present in the stadium. But this former star, an Olympics winner as well, didn’t get the special treatment. Dutch legend Floris Jan Bovelander sat, inconspicuously, amidst the spectators and watched the Netherlands take on Germany. Bovelander has become a regular visitor to India over the last few years. The 52-year-old is part of the One Million Hockey Legs project, which aims to take hockey to 1 million children across India. Bovelander also has academies running in the country. If Bovelander was looking to inspire his compatriots with his presence, it didn’t work as the Dutch lost 4-1. But Bovelander “wasn’t too disappointed”. The Netherlands are still among the favourites to reach the quarterfinals. Bovelander will be back in Bhubaneswar at that stage. — IG