WASHINGTON: Donald Trump''s decision to join PM Narendra Modi for the diaspora event in Houston suggests that Trump considers Modi to be his friend and ally, a Pakistani diplomat said. 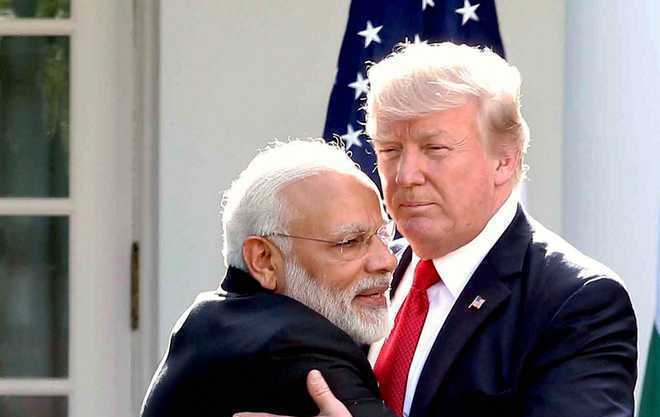 US President Donald Trump's decision to join Prime Minster Narendra Modi for the mega diaspora event "Howdy, Mody!" in Houston on September 22, suggests that Trump considers Modi to be his friend and ally, a former top Pakistani diplomat said Monday.

"President Trump is signalling clearly that while he may have hosted (Pakistan) Prime Minister Imran Khan, it is Prime Minister Modi that he considers his ally and friend," former Pakistani Ambassador to the US, Husain Haqqani told PTI.

Haqqani, 63, who has authored several bestselling books on Pakistan, is currently a senior fellow and director at the South and Central Asia department of think-tank Hudson Institute.

"That (Howdy, Mody! event) will certainly depress those who thought Khan's last trip to Washington represented a breakthrough in US-Pakistan relations," Haqqani said in response to a question, a day after the White House announced Trump would join Modi at the mega Houston rally, which would be attended by more than 50,000 Indian Americans.

The US India Strategic and Partnership Forum (USISPF), one of the organising partners of the event, hailed Trump's participation and said bilateral trade between India and the US has seen an extremely positive trajectory in the last decade.

"This unprecedented gesture by both leaders shows their commitment towards the US-India partnership and why the two countries continue to be natural allies," USISPF president Mukesh Aghi said.

"As the energy capital of the US, Houston is the appropriate venue for the two leaders to meet. Just this year, US energy exports to India have accounted for nearly 75 per cent of overall exports. Companies from both countries are actively discussing investments in both countries and strategic partnerships," he said.

"We have witnessed an extremely positive trajectory in our bilateral trade over the last decade," Aghi said.

According to USISPF projections, US-India bilateral trade could grow from USD 143 billion to USD 327 billion by 2025, if the last two years' trade growth rate of 12.5 per cent continues.

In a report, CNBC news said Trump's presence at the "Howdy, Modi!" event is intended to renew US-India relations and showcase support for the prime minister following strong criticism of the government's handling of the Kashmir issue and tense trade talks between officials from both countries.

Accorrding to a CNBC insider, Trump's presence on stage with Modi will show Pakistan that the US is backing India.

"For Modi, it's important that the US doesn't support Pakistan overtly," Akhil Gupta, former chairman of asset management group Blackstone India, said in an interview to CNBC.

Meanwhile, Texas Senator John Cornyn said he is looking forward to attending the Trump-Modi rally in Houston on Sunday.