SANGRUR:Efforts of the National Disaster Response Force (NDRF), Army and locals notwithstanding, only part of the Ghaggar breach &mdash; stretching 15 feet &mdash; near Phullad village in Sangrur has been plugged. 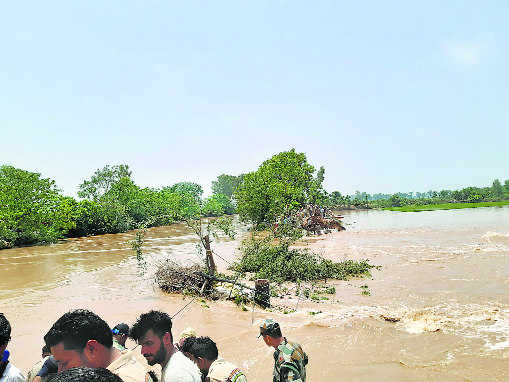 A 100-foot-wide breach in the Ghaggar near Sangrur has inundated 4,000 acres of agricultural land.

Efforts of the National Disaster Response Force (NDRF), Army and locals notwithstanding, only part of the Ghaggar breach — stretching 15 feet — near Phullad village in Sangrur   has been plugged. The nearly 100-foot-wide breach occurred on Thursday morning, inundating Salemarh, Moonak, Phullad and surrounding villages, forcing residents to move to rooftops.

Gurpreet Singh Kangar, Minister for Revenue, Rehabilitation and Disaster Management, who visited the site today, said the government had ordered a  special ‘girdawari’ and farmers who had incurred losses would  be paid adequate compensation.

Ghaggar, flowing above the danger mark, has flooded 4,000 acres of agriculture land. Lack of mechanical boats, safety jackets and other equipment is impeding operations. There is no alternative route to carry sandbags to  the breach site to plug it. “Despite several requests, the administration and  the Punjab Government have failed to provide mechanical boats and safety jackets. The Army and NDRF have mechanical boats but they are using these for their  officers and not locals” Sukhdev Singh of Phullad village pointed out. A worried Kamaljit Singh said he had grown paddy on 12 acres, which was now submerged. “If it continues to rain, I will lose my crop and suffer losses in lakhs,” he said.

According to drainage department officials, from Khanauri to Makraud  Sahib the width of the riverbedis102 feet, with the government acquiring adjoining land from farmers in 2006. After Makraud Sahib towards Haryana, land acquisition has been halted owing to some court litigation and the riverbed width here is reduced to 56 feet, and hence the breach.

“The Punjab Government has yet to release a sum of Rs 25 lakh sought by the Sangrur administration for cleaning and repair of Ghaggar embankments.The CM must look into the matter,” said Leader of Opposition (LoP) Harpal Singh Cheema, while on a visit to the affected villages. Coming to the rescue of villagers, gurdwara management committees have started langar. “The absence of a passage is the main problem owing to which we have managed to plug only a small portion of the breach. We are trying to arrange for motorboats for the locals” said DC Ghanshyam Thori.