CHANDIGARH: The genetically modified (GM) brinjal crop in Ratia, Fatehabad, was uprooted and “deeply buried” today on the recommendation of a group of experts. 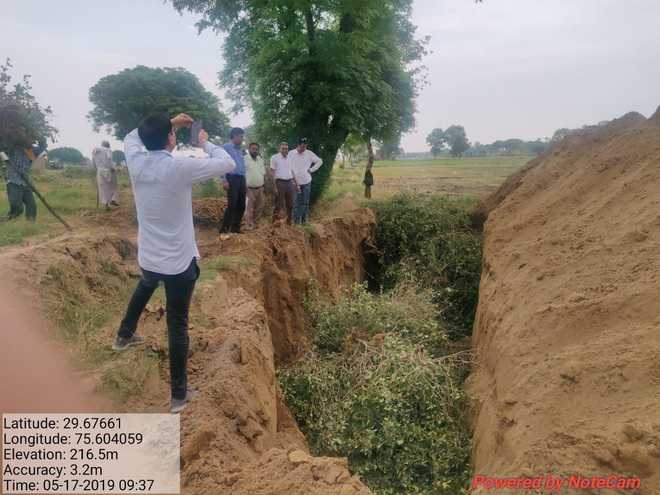 The genetically modified brinjal crop being destroyed and buried in Fatehabad on Friday.

The genetically modified (GM) brinjal crop in Ratia, Fatehabad, was uprooted and “deeply buried” today on the recommendation of a group of experts.

“The GM crop in Fatehabad has been destroyed after a committee of experts gave the go-ahead for its removal. There is no provision of giving compensation to the affected farmer,” said Deputy Commissioner, Fatehabad, Dhirendra Khadgata.

The GM brinjal was being cultivated by a farmer, Jeewan Saini, in Ratia for the last two years. He had been consuming and selling it too.

The Director General, Horticulture Department, Dr Arjun Saini, said the crop was uprooted and deeply buried. “The government was serious about it and taking all possible measures to completely destroy the GM crop,” he said.

“The Horticulture Department will keep a check on any other such complaint. Our field officers have checked and verified that there is no such crop in the nearby area,” said Dr Ranbir Singh, Joint Director, Horticulture.

Dr Rajinder Chaudhary, an environmental activist and a representative of the Coalition for a GM-Free India, had on April 25 alleged that nine years after India banned Bt brinjal, the genetically modified (GM) crop was still in circulation. He had cited the example of Jeewan Saini from Fatehabad.

The Horticulture Department had received the complaint on April 29. The samples from Saini’s farm were taken and analysed at the National Bureau for Plant Genetic Resources (NBPGR), Delhi.

In its report dated May 10, the NBPGR ruled out the possibility of intrusion from outside. However, in the screening tests, three promoter or marker genes were found positive, implying that the crop was genetically modified.

Cultivated by Ratia farmer for 2 years