Get 485 schemes under one roof 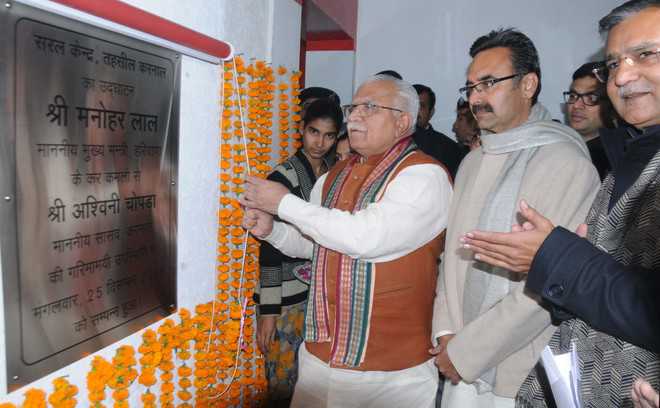 Chief Minister Manohar Lal Khattar on Tuesday dedicated to the public 115 Antyodaya Saral Kendras (facilitation centres) across Haryana through video-conferencing from the Mini-Secretariat. These would provide services of 485 schemes and services of 37 departments through a single online platform under one roof.

“We have been observing the birth anniversary of former Prime Minister Atal Bihari Vajpayee and Pandit Madan Mohan Malviya as Good Governance Day since 2014. We have initiated several steps, including e-registration. Continuing our efforts, we have started Antyodaya Saral Kendras to provide benefits of all schemes,” he said.

“People need not go to any department for the services which are being provided at saral kendras. They have to come to the centre and employees posted there will assist him to fill in forms and complete formalities in availing benefits of the schemes,” he said.

The Chief Minister stated that this step would bring transparency. “We will monitor the facilities being provided at these centres from the headquarters. The services covered under the Right to Service Act will be time-bound and employees will have to complete these within the assigned period,” he added.

He further said facilities of around 600 services and schemes would be provided under this project soon. He said residents could avail of information about this initiative on the toll-free number 18002000023. Staff members were being trained to assist people at these centres and residents could apply online using the Saral portal from home, he pointed out.

Khattar said on the pattern of the Umang app, an initiative of the Union government, the state government would develop an app for providing more information about this project. He honoured 11 employees for their work.

Chairing a programme at OPS Vidya Mandir, he announced the renaming of childcare centres as ‘Jagannath Ashrams’. Children from various orphanages participated in the event, which was organised by the women’s wing of the Akhil Bharatiya Vaish Federation. He inaugurated a branch of the SBI on the premises of Kalpana Chawla Government Medical College and Hospital.