Illegal felling of trees goes on in Mahendragarh villages

MAHENDRAGARH: Illegal felling of a large numbers of trees in several villages under the Nangal Choudhary block near the Krishnavati river has come to the fore. 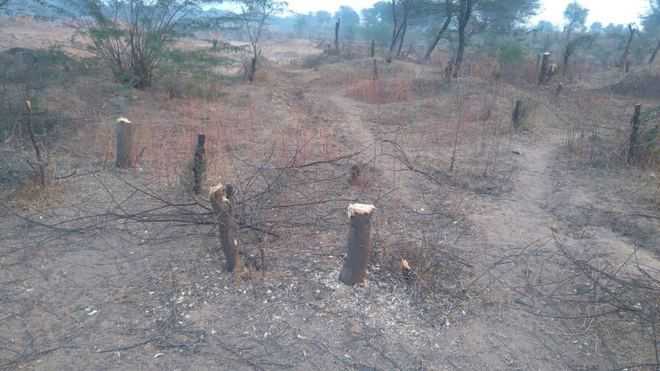 Illegal felling of a large numbers of trees in several villages under the Nangal Choudhary block near the Krishnavati river has come to the fore. Jan Jagriti, an NGO, has brought the case to the knowledge of the District Forest Officer (DFO), who has directed the Range Officer to inquire into the matter.

The NGO has suspected the involvement of those carrying out mining activities in the area and sought action against them to prevent felling of trees, said sources.

“More than 5,000 green trees have been cut in 22 villages illegally by those running stone washing plants and carrying out mining activities in the area, which has been declared as a dark zone to preserve the environment from deterioration,” said Satyapal Yadav, founder of the NGO.

He said activists of the NGO had conducted a survey of all these villages and also taken pictures of such trees so as to use them as evidence before the authorities.

“We have also lodged a complaint with the DFO regarding illegal felling of trees and sought a thorough inquiry and action against the guilty,” said Yadav, adding that a PIL would be filed in the High Court if the authorities failed to take any action.

He said thousands of saplings were planted in the Aravali zone and Krishnavati river every year, but those indulging in illegal mining were posing a threat to the environment by cutting these trees.

Mahendragarh DFO Sunder Lal said, “Since the area does not come under the Forest Department, we cannot directly intervene into the matter. But cutting trees without permission is a crime. Hence the Range Officer has been directed to visit the affected villages and submit a report in this regard so that action could be taken against those found violating the laws.”