CHANDIGARH: Haryana on Thursday ended up with a hung assembly with the ruling BJP emerging as the largest party bagging 40 seats, but still six short of the halfway mark needed to form the next government. 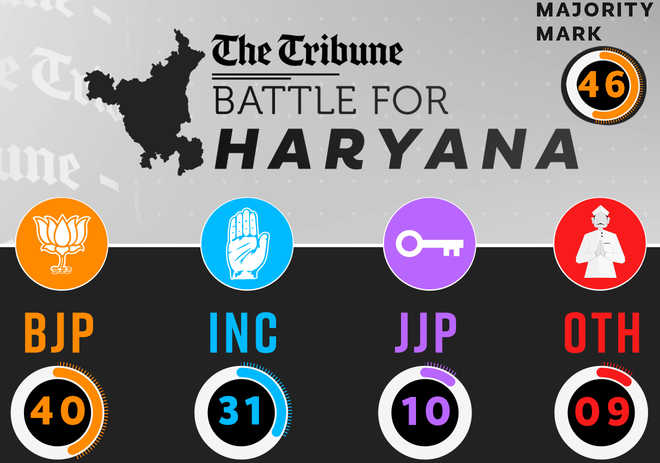 Haryana on Thursday ended up with a hung assembly with the ruling BJP emerging as the largest party bagging 40 seats, but still six short of the halfway mark needed to form the next government.

The Congress won 31 seats, the Jannayak Janta Party 10, the Indian National Lok Dal and Haryana Lokhit Party one each. The Aam Aadmi Party, which contested 46 seats, was decimated.

The split verdict triggered hectic political activity. At least two independents had boarded a flight to Delhi for a meeting with BJP leadership, party sources said.

The BJP’s final tally came as a disappointment for a party that had won all 10 parliamentary seats in the 2019 Lok Sabha polls, and predicted that it will cross 75 seats this time in the assembly.

But eight of 10 ministers fielded by the BJP lost.

In the Lok Sabha polls, the BJP cornered 58 per cent of the vote share, which has now dropped to about 36.5 per cent. Despite the loss of seats, this is till about three percentage points more than what the party got in the 2014 assembly polls.

The Congress vote share is up nearly eight percentage points since 2014.

For the state’s main opposition party, hit by infighting that required a change in the state leadership ahead of the October 21 election, the results gave it a shot at power — if the JJP extends support.

As counting trends indicated that no party would get enough seats in the 90-member House to form the government, senior Congress leader and former Chief Minister Bhupinder Singh Hooda sought support for his party.

“This mandate is against the BJP. The JJP, INLD and others, including the independents, should join hands with the Congress to keep the BJP at bay,” he told reporters in Rohtak.

Hooda alleged the administration was putting pressure on the independents at the behest of the BJP and not allowing them to move freely.

Commenting on the early trends, JJP leader Dushyant Chautala said, “This shows there was huge anti-incumbency against the (Manohar Lal) Khattar government.”

But he remained non-committal on whom he will support.

“It is too early to say anything. We will first summon a meeting of our MLAs, decide who would be our leader in the House and then take it further,” he said.

However, he said the people of Haryana want “change”.

State Congress chief Kumari Selja said the people of Haryana have rejected the BJP and are ready to embrace “a new dawn of justice”.

In the 2014 assembly elections, the BJP formed the government on its own, winning 47 seats. The Congress had then won 17 seats, INLD 19, Shiromani Akali Dal one, Bahujan Samaj Party one and independents five.

The BJP strength in the House later rose to 48 after it won a bypoll.

JJP leader Dushyant Chautala won by 47,452 votes over the sitting BJP MLA Prem Lata in Uchana Kalan. Prem Lata is the wife of former Union Minister Birender Singh, and has defeated him earlier.

The BJP failed to break the Congress stronghold — the Deswali or Jat dominated belt of the state comprising Rohtak, Jhajjar and Sonipat districts. It picked up just one seat there, Rai in Sonipat. The Congress won 11 seats in this belt.

The BJP held on to its Jind seat and did well in some pockets of southern Haryana and in Faridabad district.

Raj Kumar Saini, chief of Loktanter Suraksha Party and former BJP MP from Kurukshetra, was defeated by the Congress candidate in Gohana.

Most exit polls had predicted a comfortable victory for the BJP, which came to power for the first time on its own in Haryana in 2014. — PTI