CHANDIGARH: Complaints of eye infections following botched up cataract surgeries continue to come in from several districts of the state even as the health authorities are yet to provide any plausible reason for similar infections to 24 patients in the Kurukshetra government hospital. 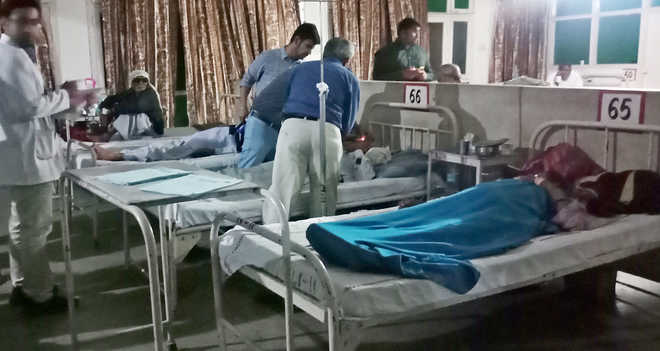 Patients under treatment at the PGIMS in Rohtak. Manoj Dhaka

Complaints of eye infections following botched up cataract surgeries continue to come in from several districts of the state even as the health authorities are yet to provide any plausible reason for similar infections to 24 patients in the Kurukshetra government hospital.

Asked about chances of recovery, PGIMS Director Dr Rohtas K Yadav said their condition would be clear in a week or so.

In Bhiwani, 35 patients operated upon for cataract suffered infection in the eyes, prompting the health authorities to shut the OPDand operation theatre in Kisan Lal Jalan Government Eye Hospital and the general hospital in Bhiwani on Thursday.

Officials said the operations were carried out at the government hospital in Bhiwani on March 11, 12 and 16. In all, 492 patients were operated upon.

Sources said around 35 patients had complained of pain in the eyes a couple of days after the operation, but doctors advised them rest. They rushed to the hospital when their condition deteriorated, after which the hospital referred them to the PGIMS.

Dr Aditya Swaroop Gupta, Civil Surgeon, Bhiwani, said the department had instituted an inquiry to ascertain the reasons for the infections and samples would be collected from the operation theatre.

The drug control officer had been directed to collect samples of medicines administered to the patients, he said, adding they would take action against officials found guilty of negligence.

He said patients in three or four districts had developed infections and they were trying to find out the causes for the infections.

Reports from Karnal said five patients had complained of infection in the eyes between seven and 10 days after surgery at Kalpana Chawla Government Medical College and Hospital.

After the issue came to light in various districts, the Health Department on Thursday took samples of consummables such as jelly, injections and fluid being used in the operation theatre. These samples had been sent to the Central Laboratory in Chandigarh, said a doctor.

The health authorities in Kurukshetra, where botched surgeries were reported first, suspected contamination of fluids used in surgery.

‘Their condition to be clear in a week’