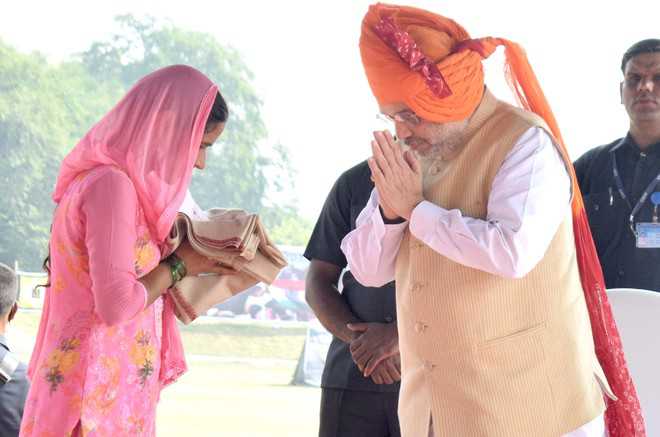 Reiterating NDA regime’s policy of “zero tolerance” on terrorism, Union Home Minister Amit Shah today said with the decision on abrogating the special status to Jammu & Kashmir under Article 370 of Constitution, Indian had entered into a “decisive battle to completely eradicate” Pakistan-supported terrorism from Kashmir.

Addressing an event to mark the 35th raising day of the elite anti-terror force National Security Guard (NSG) in Manesar, Shah said the aim was to end years of Pakistan-sponsored proxy war and terrorism and noted that the NSG was an important instrument to achieve this.

“I believe that with the abrogation of Article 370 by PM Narendra Modi, we have initiated a decisive battle against years of proxy war and terror acts perpetrated by our neighbour (Pakistan) and this step will ensure long-lasting peace in Kashmir and the region,” the Home Minister said.

He said India had been facing terrorism for many years and there would be very few countries across the globe which had waged such a long battle against terrorism. He said terrorism was a curse on civilised society and the biggest impediment to development.

“Our government is firm on continuing zero tolerance policy on terrorism and ensuring victory on terror,” he said. The recent big step of repealing Article 370 was aimed at eradicating terrorism from Kashmir and safeguarding the country from this scourge, he said.

Lauding the role played by the elite commando force, Shah asked the NSG to continuously work towards its vision of “world-class zero error” force. He went on to add that it had impressed the world with its capability to counter any terror attack as he recounted its operations at Akshardham temple in Gujarat and the 26/11 attacks in Mumbai in 2008. “These counter-operations instil confidence in the minds of the citizens that they are in safe hands,” he said.

Shah said the NSG had been provided with latest equipments to enhance its mobility surveillance, firepower and counter-drone capabilities, but a commando’s courage and patriotism were key to ensured victory in an operation. The force was raised in 1984 as the federal counter-terror and counter-hijack force with specialised ‘black cat’ commandos to render these tasks.