GURGAON: The overflowing of Nazafgarh drain has damaged agriculture land over 2,000 acres in five villages of the city. 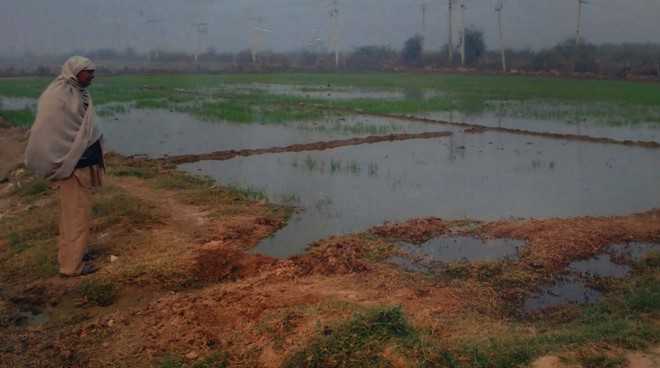 The overflowing of Nazafgarh drain has damaged agriculture land over 2,000 acres in five villages of the city.

Residents of Dhankot, Daulatabad, Budhera, Dharampur and Jhathikra villages are up in arms against the local administration. They said it was a yearly affair and presence of intoxicants in the drain had spread the scare of an epidemic.

The sewage water of Gurgaon falls into the Najafgarh drains through three sewerage treatment plants (STP). These three STPs have the capacity of treating just 150 Million Litre Daily (MLD) sewerage water while the Millennium City, on an average, generates more than 350 MLD sewerage water. As a result, a large quantity of untreated water directly flows into the drain.

“This is not for the first time it had happened. Around 2,000 acre of agriculture land has turned into waste due to contamination. Even if crops are grown here, it will be unfit for consumption. There are hardly any buyers of these lands as private builders avoid constructing high rise apartments near the drain. The villages suffer from many diseases, majority being water borne. We have been raising this issue for the past 10 years, but to no avail,” says Dhani Ram, a former panchayat member.

“No officer or minister has heard are requests till date. The government should do acquire our lands so that we can at least have money to run our families,” adds Dinesh Kumar, a resident of Dhankot village. However, the Gurgaon Municipal Corporation claims to have proposed installation of nine small STPs. It has been a year since the proposal was discussed, but there has been no implementation so far.

In 2013, Gurgaon’s former deputy commissioner PC Meena had sent a proposal to the state government for the construction of embankment along the Najafgarh drain to prevent water from overflowing to low lying areas. The proposal has gone down the drains.