CHANDIGARH:With just four days of campaigning left for the Assembly poll in Haryana, the parties’ prospects on all 90 seats of the state is becoming clearer by the day. 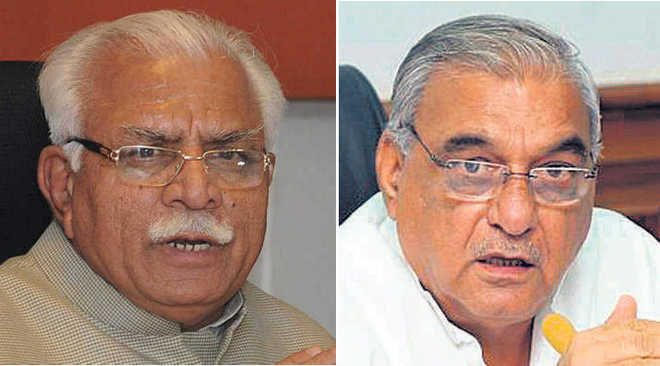 With just four days of campaigning left for the Assembly poll in Haryana, the parties’ prospects on all 90 seats of the state is becoming clearer by the day.

During an extensive travel across the length and breadth of the state by The Tribune, it has come to light that candidates of the ruling BJP are facing a stiff challenge from the main Opposition Congress on at least 40 of the 90 Assembly seats, while on seven seats, Dushyant Chautala’s JJP is giving a tough challenge to the saffron party. The BSP is in a serious contest on Jagadhari seat, while multi-cornered contests are being witnessed on 18 other seats.

A positive sign for the BJP which went to the polls with the slogan of winning 75 plus seats is that its candidates have a clear edge over its rivals on about 20 seats while the Congress candidates seems to have a distinct edge on four seats.

The seats on which the BJP has a distinct edge include the Karnal and Ambala Cantt seats represented by Chief Minister Manohar Lal Khattar and Health Minister Anil Vij, respectively, while former CM Bhupinder Singh Hooda’s Garhi Sampla-Kiloi and Kiran Choudhry’s Tosham seats are among those where the Congress seems clearly ahead.

Among the bigwigs of the BJP, Congress, INLD and the JJP who are embroiled in tough contests with their rivals are: Education Minister Rambilas Sharma, who is pitted against Rao Dan Singh of the Congress in Mahendragarh; Finance Minister Captain Abhimanyu, who is facing Ram Kumar Gautam of the JJP in Narnaund; Agriculture Minister OP Dhankar, who is pitted against Kuldeep Vats of the Congress in Badli; and state BJP president Subhash Barala, who is facing a stiff challenge from Devender Babli of the JJP in Tohana seat of Fatehabad.

Among the Congress leaders facing a stiff contest are former Speaker Kuldeep Sharma in Ganaur against Nirmal Chaudhary of the BJP, senior Congress leader Kuldeep Bishnoi against TikTok star Sonali Phogat of the BJP in Adampur, his brother and former deputy CM Chander Mohan in Panchkula against Gian Chand Gupta of the BJP, and AICC media in-charge Randeep Surjewala in Kaithal against Lila Ram Gujjar of the BJP.

The INLD leader Abhay Singh Chautala is also facing a triangular contest in Ellenabad seat where the BJP’s Pawan Beniwal and Bharat Singh Beniwal of the Congress are offering him a tough challenge.

Among the other seats where the BJP has an edge over the Congress are Ambala City, Mullana, Yamunanagar, Sadhaura, Panipat, Julana, Jind, Hansi, Barwala, Bhiwani, Rohtak, Kosli, Gurugram, Sohna, Badkhal, Ballabhgarh and Faridabad, while the Congress seems to have an edge over the BJP in Kharkhauda and Baroda, both part of the Hooda bastion.