Work together to defeat BJP: Cong 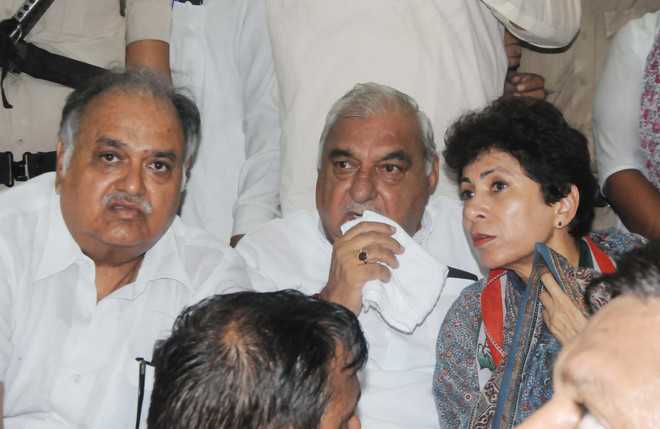 They were addressing a workers’ meeting in Karnal on Monday. They appealed to party workers to reach out at the booth level to strengthen the party. They said all party workers and leaders should make united efforts for the party’s win.

Atrocities on Dalits, incidents of crime, injustice to farmers, unemployment rate and exploitation of employees had been increased in the last five years, Selja alleged.

Urging workers to unite, she said there was a big challenge ahead, but if Congress workers worked hard with dedication, none could stop the party from coming to power.

Congress workers were ready to fight the BJP at the booth level, she asserted. Dedicated and hardworking party workers would be accommodated if the Congress was voted to power, she added.

Criticising the BJP government for its policies, Selja said Panipat was on top in the textile business during the Congress regime, but had been affected badly in the last five years.

Hooda said all workers should fight the BJP unitedly. He said unemployment was on the rise and industries were being shut. The policies of the BJP-led government were responsible for the slowdown in the national economy, he alleged.

Hooda attacked the BJP over unemployment, rising crime, shortage of electricity, shortage of doctors and poor condition of farmers. He coined the slogan ‘Khattar sarkar ek dhokha hai, Haryana bachao mauka hai’. He appealed to workers to strengthen the party at the booth level.

The two leaders alleged that Haryana has become number one state in crime and unemployment in the last more than four years. They said that the people of the state had made up their mind to oust the BJP government known for only making false promises and misguiding advertisements of development and welfare works.

Hooda said that Manohar Lal Khattar’s government had broken all records of corruption right from recruitment in government jobs to mining scams and all its misdeeds had been exposed. “The election manifesto will be prepared after consultation with people and taking their suggestions,” he added.

Selja said that the Congress is the party of the people of every section of society and there was no scope for politics based on casteism, region and religion. She asked the workers to work for bringing back to the party fold all those who had left it.