‘Minimum wages raised by up to 72%’ : The Tribune India

Minister of State for Labour and Employment Nayab Singh Saini says that the BJP government has spent Rs 422 crore on several schemes launched for the welfare of the labour class, benefiting 1.36 lakh workers during the last four years. 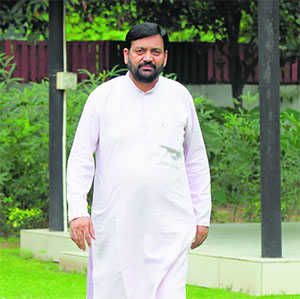 Minister of State for Labour and Employment Nayab Singh Saini says that the BJP government has spent Rs 422 crore on several schemes launched for the welfare of the labour class, benefiting 1.36 lakh workers during the last four years. He claims over 40,000 youths have been provided unemployment allowance/ honorarium amounting to Rs 275 crore. He hopes that on the strength of equal development works undertaken following the principle of ‘Sab ka saath, sab ka vikas’, the party will return to power in both Lok Sabha and Assembly elections. Excerpts from an interview with Pradeep Sharma...

In 2014, the BJP came to power on the promises of 'Sab ka saath, sab ka vikas' and 'zero tolerance to corruption'. How far have you been successful on these two fronts?

Transparency in government job recruitments has curtailed corruption to a large extent. During the previous government, corruption in job selections was the order of the day. I will not say that we have been 100 per cent successful in our efforts to eradicate corruption, yet there is no corruption at the political and senior bureaucracy level. Similarly, equal development in all 90 Assembly constituencies is what even the Opposition does not dispute. During previous governments, development was visible in only some areas represented by ruling party MLAs while our government is pursuing ‘Sab ka saath, sab ka vikas’ in letter and in spirit. During the previous Congress regime, even its party MLAs and MPs alleged a step-motherly treatment in development works. However, during the last four years, Chief Minister Manohar Lal Khattar has visited all 90 Assembly constituencies and ensured equal development everywhere irrespective of which party MLAs represent the areas. Even opposition party MLAs acknowledge equitable development works initiated by the Chief Minister. In fact, the Chief Minister had accepted all demands of Jind INLD legislator late Hari Chand Middha in the true spirit of the ‘Sab ka saath, sab ka vikas’ mantra.

The parliamentary and state Assembly elections are due next year. How do you see the political situation emerging in Haryana especially in the wake of the INLD-BSP alliance and challenges posed by the Congress and AAP?

The BJP formed the government in Haryana for the first time. Besides, it also won seven out of the 10 Lok Sabha seats in the 2014 parliamentary elections. Unprecedented development works undertaken by the BJP government under the leadership of Manohar Lal Khattar have unnerved other political parties. The INLD-BSP alliance seems to be a short-term arrangement, as BSP chief Mayawati is more inclined towards the Congress at the national level. In fact, the support base of the INLD is fast eroding, forcing it to go for an alliance with an ideologically-different political party. Past experience tells that they cannot work on a long-term basis. Similarly, the state Congress is divided in several factions, which are working at cross purposes. In fact, various Congress leaders are trying to undermine each other’s influence in their areas. Besides, people still remember various acts of omission and commission of both INLD and Congress during their regimes. Aam Aadmi Party (AAP) has no mass base in the state. The BJP is comfortably placed in the state with regard to both Lok Sabha and Assembly elections due next year. People want a stable government that does not indulge in nepotism and regionalism. People want a government which works with the objective “Haryana ek, Haryanvi ek”. While other political parties are yet to get their acts together, the BJP is ready for the elections whenever they are held.

What is going to be the main agenda of the BJP in the next elections?

Development will be the main agenda of the party in the next parliamentary and Assembly elections. Unprecedented development carried out in the country under the leadership of Prime Minister Narendra Modi and in Haryana under Chief Minister Manohar Lal Khattar will be the main issue. We are seeking votes on the ‘Sab ka saath, sab ka vikas’ principle that the BJP government had staunchly followed in Haryana. Like in the last elections, people will vote against dynastic politics, regionalism and nepotism, especially in government jobs. The systemic change brought in by the BJP without any consideration of caste, region and nepotism, besides transparency in governance and job recruitments will be our USP in the coming elections. We are going to the polls with a positive agenda as against the negative campaign of the opposition parties. Even during the monsoon session of the Vidhan Sabha, which ended on September 11, the Opposition could not raise many issues of public welfare.

But the Opposition alleges that the BJP has not fulfilled the promises made to people in the last election manifesto; your comments?

If you compare the Congress’ 10-year rule with the four-year tenure of the BJP, you will notice the difference. Be it farmers, traders, state government employees or sportspersons, every section of society has benefited from our ‘pro-people’ policies during the last four years. On September 11, the Chief Minister announced a reduction in the power tariffs, which has happened for the first time in many years and would benefit around 41.53 lakh consumers constituting over 46 per cent of the total consumers across the state. Now, the government is fulfilling promises made to all sections of society. In fact, in some areas, the BJP has even done what it had not promised in its election manifesto. The frustration of the opposition parties stems from the fact that they have lost credibility among the voters. With no real issue to flag before people, they are making wild allegations against the state government, which is committed to public welfare.

The Chief Minister has gone on record saying that the Assembly elections will be held on time next year after the Lok Sabha elections. I am a disciplined soldier of the party and will faithfully perform any election responsibility given by the top leadership. A disciplined party like ours is always ready for elections. BJP workers are geared up for the elections whenever these are held. We will seek vote on the basis of our performance during the last four years of rule.

What is the quantum of relief provided by the BJP government to the workers under various schemes during the last four years?

The state government has spent Rs 422 crore on various schemes that have benefited about 1.36 lakh workers. During the 10-year rule of the Congress, only Rs 28 crore was spent on various schemes that benefited only 19,000 workers. Besides a provision of various incentives for the labour class, the government has launched an intensive awareness campaign about various welfare schemes for workers. The BJP is harnessing information technology in a big way to check irregularities in the implementation of various schemes so that their benefits reach the intended beneficiaries. We are working on the principle of Antyodaya under which the poorest of the poor should get the benefits of various schemes meant for the labour class.

What is the status of subsidised canteens, which the state government was to start to provide cheap food to the poor?

At present subsidised canteens are functional in nine districts where a wholesome meal is provided to poor people for Rs 10. The objective behind the scheme is that nobody should remain hungry in the state. All 22 districts are to be covered under the scheme in the months to come. We are committed to a ‘hunger-free’ Haryana.

The state government amended some industrial laws recently. What was the purpose?

The state government has amended 18 labour laws to facilitate workers and employers and remove irritants and practical problems confronting the state industry. The Punjab Shops and Commercial Establishments Act, 1958, has been amended to allow women employees to work in night shifts. Now, women can work from 7 pm to 6 am provided the employer ensures their safety and safe transportation. This will benefit 439 commercial establishments and 92,718 women employees in the state. Besides, under the Industrial Disputes Act 1947, the number of employees that any industry can employ has been increased from 100 to 300 and the permission of the government has been made mandatory for any lay-off or shutdown.

Payment of minimum wages to skilled and unskilled workers has always been a contentious issue. Has your government increased minimum wages for these categories of workers?

During the last four years, there has been a record increase in the salaries and allowances of the state government employees. The previous Congress government headed by Bhupinder Singh Hooda did not even implement the Sixth Pay Commission recommendations for some sections of employees while our government was among the first few governments in the country to implement the Seventh Pay Commission recommendations. The state government employees are an important part of society and their genuine concerns and demands will be taken care of at regular intervals. There is a grievance redress system in place in all departments, which is being monitored by the government. Instead of protesting in streets, the government employees should present their grievances at appropriate forums. Moreover, they should be careful of the vested interests that may try to exploit their sentiments for their narrow political gains.

What do your think about the unruly behaviour of two senior MLAs — Abhay Singh Chautala (INLD) and Karan Dalal (Congress) — in the Vidhan Sabha on September 11?

The behaviour of the two legislators is condemnable. We are elected to the Haryana Assembly by people to frame laws for their welfare and raise their issues. The Haryana Assembly has already passed a resolution condemning the behaviour of the two MLAs. In fact, one of them — Karan Dalal — has been suspended from the House for one year. Hopefully, the punitive action will deter other MLAs from indulging in such an unruly behaviour in future. Moreover, the voters of Haryana are closely watching the activities of their elected representatives and will accordingly decide whom to vote in the forthcoming elections. In a democracy, all elected representatives are answerable to their electorate.

Your government started the ambitious “Saksham yuva scheme” to provide unemployment allowance/  honorarium to unemployed youths. What is the latest update on the scheme?

The government has provided over Rs 275 crore as unemployment allowance/ honorarium to around 40,000 youths. This is only a temporary arrangement to provide some monetary help. Postgraduate unemployed youths are being given Rs 9,000 honorarium per month while graduate youths are being provided Rs 6,000 per month. The amounts are provided as social security till they find permanent sources of employment and do not indulge in undesirable activities to earn their livelihoods.

Was speaking for the first time in the House after his Bhara...