A Chandigarh Police cop, an eco-warrior

Devender Sura, a Chandigarh Police constable, has become popular as ‘Pariyavaran Mitra’ for his stupendous work towards environment protection. 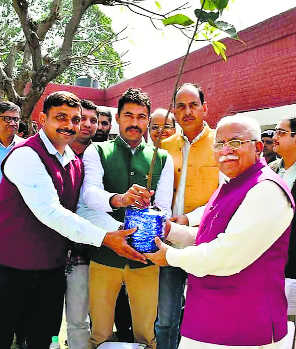 Devender Sura (second from left) presents a sapling to Chief Minister Manohar Lal Khattar during his visit to Sonepat.

Devender Sura, a Chandigarh Police constable, has become popular as ‘Pariyavaran Mitra’ for his stupendous work towards environment protection. He has launched the ‘Ped Lagao, Bhavishya Bachao’ (Plant Tree, Save Future) campaign and already planted over 1.3 lakh saplings by spending around Rs 30 lakh from his own pocket in the last seven years.

Devender has a force of more than 7,400 volunteers. He has also formed Pariyavaran teams comprising around 3,000 volunteers in 152 villages of Haryana, Delhi and Punjab. He has a big nursery of plants in two acres on the outskirts of Sonepat town. He has also taken a nursery on one and a half acre on an annual lease of around Rs 54,000.

Besides taking help from educational institutions and gram panchayats, he utilises occasions such as festivals, marriages, birthdays, and anniversaries to plant saplings as well as distribute plants free of cost.

The Director General of Chandigarh Police, Sanjay Bainiwal, has also appreciated Devender’s selfless contribution towards the cause. The SSP, Traffic, Chandigarh, Shashank Anand, has also taken part in his plantation campaign and planted saplings around the Sukhna Lake and the Deputy Commissioner’s office.

Arpinder Singh Virk, Asian Games gold medallist in triple jump and Devender’s friend, visited his Sonepat nursery on September 2 and removed unwanted growth of weeds etc. He offered him help to give a boost to his selfless campaign.

Devender says he has been spending 80 per cent of his monthly salary on the plantation programmes and his father Kali Ram, a retired Army man who is serving as a security guard in a branch of the SBI in Delhi, has been running the family.

“I have adopted Bidhal village on the Sonepat-Gohana road and around 6,600 saplings have already been planted at schools, cremation ground, on both sides of link roads and around village ponds,” he says. He uses only organic pesticide and fertiliser for growing plants in his nursery.

He says, “I avail two months of leave every year for planting saplings while volunteers take care of his nursery when he is on duty”. Devender wants to set up a nursery in Chandigarh and is looking for a suitable place.