Shortened antibiotic course may do more harm than good

NEW YORK: A shortened course of antibiotics to treat children with ear infections may result in worse clinical outcomes without reducing the risk of drug resistance or adverse events, researchers have warned. 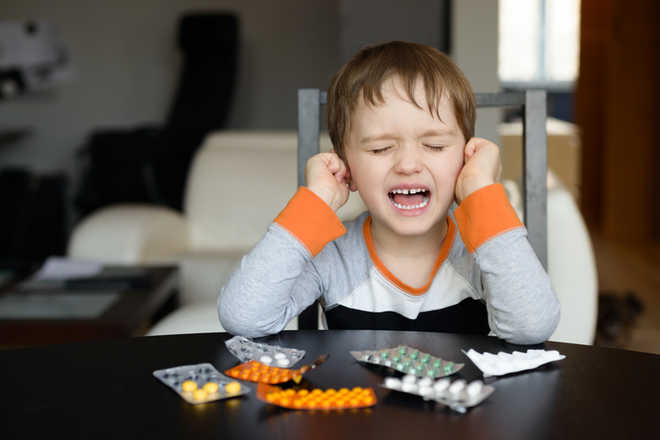 A shortened course of antibiotics to treat children with ear infections may result in worse clinical outcomes without reducing the risk of drug resistance or adverse events, researchers have warned.

Acute otitis media is a bacterial infection of the middle ear behind the ear drum which causes it to become painfully inflamed.

Three out of four children experience this infection within their first year. Consequently, it is the most common reason why children are prescribed an antibiotic.

Researchers from University of Pittsburgh Medical Centre (UPMC) in the US studied 520 children between 9 and 23 months of age with acute otitis media.

Children with acute otitis media were randomly assigned to either a standard 10-day regimen of the antibiotic amoxicillin-clavulanate or a shortened 5-day treatment followed by five days of placebo.

Neither the study participants nor the physicians knew which group the participant was assigned to.

Children were followed starting in October through the rest of the annual respiratory-infection season and had a final visit during the following September.

They found that the risk of treatment failure in the five-day group (34 per cent) was more than twice as much the risk in the 10-day group (16 per cent).

The results were significant, since the trial design was set up to find out whether the five-day treatment would be as good as the 10-day regimen, said Hoberman.

Instead, researchers found that not only was their initial assumption proven wrong, but the 10-day treatment was far more effective.

When they tested the presence of antibiotic-resistant bacteria through nasopharyngeal (back of the nose) swabs, there was no decrease in the five-day group as might have been expected with a shorter duration of antibiotics.

Also, reduced-duration antibiotics did not decrease the risk of frequent adverse events like diarrhoea or diaper rash.

When testing the risk of a recurrent infection, they found that it was higher when children were exposed to three or more children for 10 or more hours per week, such as in a day care setting, or if the initial infection occurred in both ears as opposed to just one ear.

The study was published in the New England Journal of Medicine. — PTI