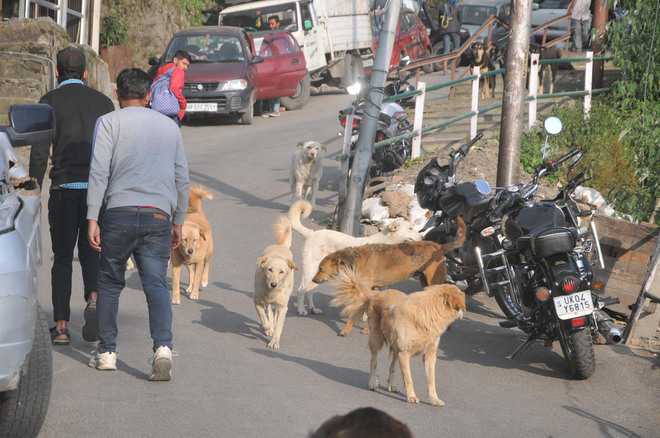 The Shimla Municipal Corporation (SMC), which had launched the adoption programme last week, still has miles to go as far as curbing the stray dog menace is concerned.

All its efforts to contain the number of canines by sterilising them have proved futile in the last 14 years.

The five dog lovers are Dr Vibhuti Sharda, Shabnam Ahluwalia, Dheeraj, Kamlesh and Reeta Chauhan. “Each person has adopted two dogs, which will fetch them a 50 pc relief on the garbage bill, along with free vaccination and registration,” said Dr Neeraj Mohan, veterinary officer of the SMC.

“Holland has adopted the adoption policy to tackle the stray dog menace,” he added.

For the last 14 years, the SMC’s stray dog birth control society, set up in 2005, kept claiming that it had vaccinated and sterilised over 9,133 dogs under the animal birth control and anti-rabies activity from October 2006 to October 2019.

Both killing and trans-location of street dogs are banned under the law.

There are over 2,200 stray dogs in various wards of the city, including The Mall and The Ridge.

“In the evening, the animals can be seen rummaging through leftovers outside shops and slaughter houses,” a veterinarian said.

There have been cases of dog bite in the city — about 150 every month. Sterilisation does not cover the entire population of dogs in the city and suburbs like Vikasnagar, Kasumpati, Mehli, Totu, Shoghi, Dhalli, Mashobra, Bhattakufer and Summer Hill.

Pankaj Rai, Municipal Commissioner, said: “We are getting a good response as more applications are being received. We hope it will address the problem.”

It is strange that NGOs, which get funds from different agencies, are yet to do their bit. Another problem is that there is no dog centre in the city. “As soon as a dog is spotted, it should be taken to the centre,” another veterinarian said.

“Even if two dogs are left unsterilised, their population can go up to 500 in two years,” Dr Mohan said.

Municipal Commissioner Pankaj Rai said the MC had proposed that those who adopted the stray dogs would not pay garbage bill. Besides, they would also get free parking in MC lots.

Each person has adopted two dogs, which will fetch them a 50 per cent rebate on the garbage bill, along with free vaccination and registration. —  Dr Neeraj Mohan, Veterinary officer, SMC