SHIMLA: As polling for the four Lok Sabha seats of Himachal Pradesh is almost a month away, the Ellerslie building - housing the state secretariat - wears a deserted look these days with none of the Ministers in the Jai Ram Thakur-led cabinet turning up. 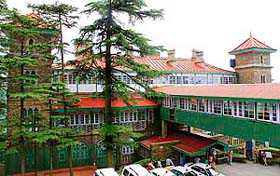 As polling for the four Lok Sabha seats of Himachal Pradesh is almost a month away, the Ellerslie building -- housing the state secretariat -- wears a deserted look these days with none of the Ministers in the Jai Ram Thakur-led cabinet turning up.

Even 'lazy' bureaucrats and officials prefer to stay away most of the time, much to the disappointment of the public, who comes from faraway places daily to get their grievances redressed.

Octogenarian Durga Negi, who comes to meet the Chief Minister to get monetary assistance for her son's treatment, said: "I am coming daily to meet him but I am told by his staff that he is busy in election tours but he will come to office any day."

Carrying medical bills, this farm labourer from Chopal in Shimla district is seeking a financial assistance of Rs 200,000 from the Chief Minister's Relief Fund. Her son is suffering from a congenial heart disease.

On an average, over a hundred people from across the state come on a daily basis to meet the Chief Minister with some problems. Five to 10 visitors are those who genuinely come for some financial assistance, officials admit.

The other beneficiaries include students who need money for higher studies.

Most of the bureaucrats are stationed outside the state to manage parliamentary polls in other states. Those who are here prefer to stay away from the Secretariat.

The attendance is almost thin after lunch.

"The normal working of the Secretariat comes to almost standstill for at least a month in every election -- be it Assembly, Lok Sabha or the local bodies. Most of the officials prefer not to take decisions on pretext of the model code of conduct," admitted a senior government functionary.

The Chief Minister has been repeatedly advising his cabinet colleagues to spend more time in offices rather than touring constituencies but during the elections the situation gets worst, he added.

Even the security personnel appeared relaxed in the absence of VIPs in the secretariat.

Senior CPI-M leader and legislator Rakesh Singha on Friday lashed the state BJP government over its failure to announce compensation for the growers whose fruit and vegetable crops were damaged extensively by hailstorms in Shimla district on April 18.

He claimed the farmers has suffered a loss of Rs 7 crore. In a letter to Chief Secretary B.K. Aggarwal, he demanded immediate assessment of crop loss and release of compensation.

Himachal Pradesh will go to the polls for the four Lok Sabha seats -- Shimla, Hamirpur, Kangra and Mandi -- on May 19. IANS