SHIMLA: A former Union minister and four-time Lok Sabha MP from Telengana, Bandaru Dattatreya was today sworn in as the 27th Governor of Himachal Pradesh. 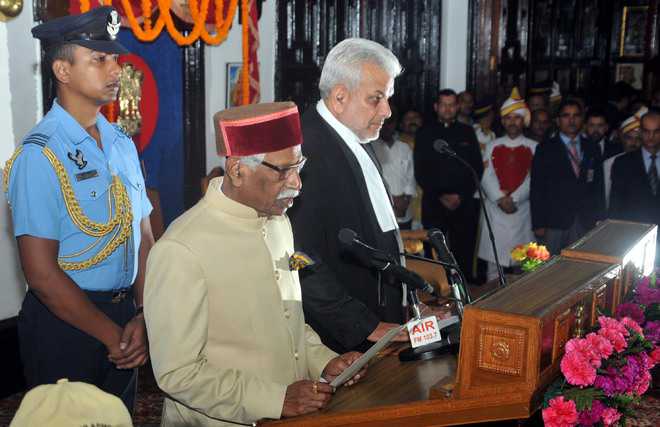 Justice Dharam Chand Chaudhary of the High Court administers the oath of office and secrecy to Bandaru Dattatreya as Governor at Raj Bhawan in Shimla on Wednesday. Photo: Amit Kanwar

A former Union minister and four-time Lok Sabha MP from Telengana, Bandaru Dattatreya was today sworn in as the 27th Governor of Himachal Pradesh.

Justice Dharam Chand Chaudhary, Judge of the High Court, administered the oath of office and secrecy to him at Raj Bhawan. Chief Minister Jai Ram Thakur was also present.

He said working for the poor, needy and economically weaker sections of society would remain his priority. “Himachal is known as Devbhoomi and a land of valiant soldiers. So I consider myself lucky for getting an opportunity to serve here,” he said during a media interaction.

Dattatreya stressed the need for creating awareness against drug addiction and protecting the environment.

“It will be my endeavour to work towards ensuring qualitative education in seats of learning and at the same time link it to job opportunities,” he stated.

“Attention should also be paid towards inculcating moral values among our youth”, said Dattatreya.