SHIMLA:Chief Minister Jai Ram Thakur faces a challenging task of ensuring that the BJP retains all four Lok Sabha seats which the saffron party had won for the first time ever in the 2014 polls. 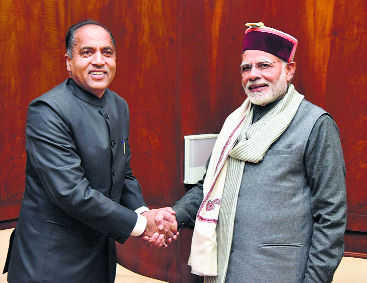 Chief Minister Jai Ram Thakur is a confidant of PM Narendra Modi and will have to work hard to do a repeat of 2014.

Chief Minister Jai Ram Thakur faces a challenging task of ensuring that the BJP retains all four Lok Sabha seats which the saffron party had won for the first time ever in the 2014 polls.

With a generational shift in Himachal politics after the 2017 Assembly elections — which saw former CMs Virbhadra Singh and Prof Prem Kumar Dhumal take a back seat — this time the parliamentary polls could see a whole new approach in terms of election and campaign strategy.

If it was the Modi wave which saw the BJP win all four Lok Sabha seats in 2014, this time the party is again banking heavily on the Modi factor, as the Prime Minister shares a close affinity with Himachal and its people and makes it a point to highlight that on every available occasion.

Himachal may have a mere four Lok Sabha seats, but the stakes are high for stalwarts like former Chief Minister Shanta Kumar, who is the sitting MP from Kangra, and for Prof Dhumal, whose son Anurag Thakur, a three-time MP from Hamirpur, will be trying his luck again.

Similarly, ensuring that BJP wins the Mandi Lok Sabha seat would be a matter of prestige for CM Jai Ram Thakur, who belongs to Mandi.

The Congress, which suffered its worst ever defeat in the 2014 polls when it could not win even a single seat, faces an arduous task this time too. The BJP is already in the poll mode, while the Congress is struggling to set its house in order with a new state party president at the helm.

The change of guard, with the replacement of Sukhwinder Singh Sukhu as the state Congress president, very close to the parliamentary polls could prove to be damaging for the party as the new man in charge, Kuldeep Rathore, is still trying to find his feet.

As always, in the end, it seems, it will again all come down to Virbhadra Singh if the party hopes to stop the BJP juggernaut.

The BJP is likely to repeat most of its sitting MPs. The possibility of Shanta Kumar re-contesting from Kangra too is not ruled out as the party is not rigid with the 75-year age bar.

The sitting BJP MP from Shimla Virender Kashyap and Ram Swaroop from Mandi do face resentment, but whether they are replaced remains to be seen.

The Congress is yet to decide its candidates but there seems to be reluctance among leaders like Virbhadra Singh and Mukesh Agnihotri to take the electoral plunge. The party could be in the game if it is able to field leaders like Virbhadra from Mandi, Mukesh Agnihotri from Hamirpur, Asha Kumari or GS Bali from Kangra and Dhani Ram Shandil from Shimla.

Himachal politics has primarily been bipolar, with BJP and Congress being the two main players. AAP, which tried its luck in the 2014 Lok Sabha elections, could garner a mere 2.06%  votes. The BJP had polled 53.85 and Congress 49.58% votes in 2014.