UNA: The residents of Kangar village in Haroli assembly constituency have protested against the illegal mining taking place in the area. The members of Kangar panchayat yesterday went to the Swan river bed and stopped the JCB machines engaged in illegal mining. 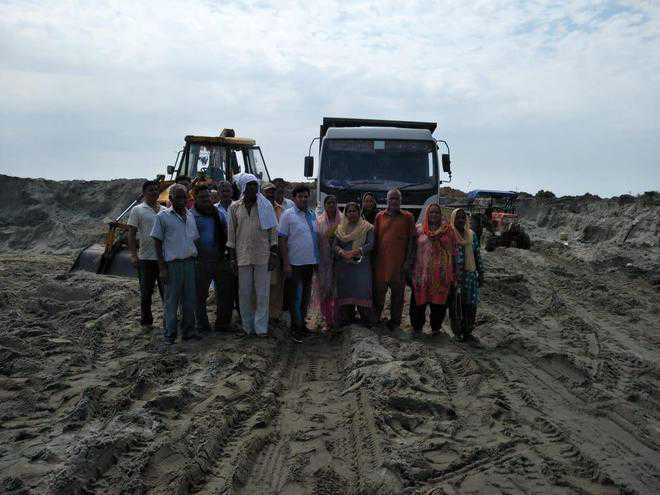 The residents of Kangar village in Haroli assembly constituency have protested against the illegal mining taking place in the area. The members of Kangar panchayat yesterday went to the Swan river bed and stopped the JCB machines engaged in illegal mining. The panchayat officials later submitted a complaint to the police officials to take action against people resorting to illegal mining in their area.

Shashi Bala, pradhan of the village, while taking to The Tribune, said that the illegal mining of sand in their area was threatening Swan river canalisation work. In case the bundhs constructed along the Swan river breach in the monsoons, this would cause heavy damage to the land of villagers.

She alleged that the village panchayat has written to the police and mining authorities regarding illegal mining taking place in their area many times but no action was being taken against the culprits as they enjoyed political patronage.

Mohinder Pal, panch in the village, said that despite ban, mechanical mining was taking place in the Swan. Huge dumps of sand collected along the banks of the river could be seen. They are then further transported outside the state.

Mukesh Agnihotri, CLP leader and sitting MLA from Haroli assembly constituency, said that the BJP came to power alleging that various mafias were thriving during the Congress rule. However, now when the saffron party was ruling the state, illegal mining in Una had crossed all limits.

The CLP leader alleged that the National Green Tribunal has totally banned mechanical mining in the river beds. However, it was strange that in Una no such ban was visible. He alleged that mining was taking place even outside the leased out areas for sand mining.

The mining officer Una, Paramjeet Singh was not available for comments despite efforts to contact him on phone.

Mining has crossed all limits: Agnihotri