21 yrs on, Dhaulasidh project yet to see light of day

The Dhaulasidh Hydro Electric Project (DHEP) was conceived by the Himachal Pradesh Government in 1998 by the then Chief Minister Prem Kumar Dhumal, but unfortunately, even after 21 years, the project has not seen the light of day. 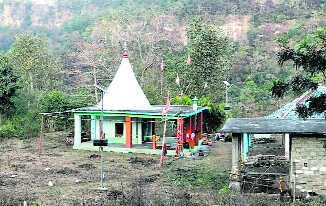 The Dhaulasidh Hydro Electric Project (DHEP) was conceived by the Himachal Pradesh Government in 1998 by the then Chief Minister Prem Kumar Dhumal, but unfortunately, even after 21 years, the project has not seen the light of day.

Significantly, the project was proposed on the horse shoe curve of the Beas and since there was a temple of local deity Dhaulasidh (see pic), it was named Dhaulasidh Hydro Electric Project. It was planned on the flow of the Beas near the temple at Amli village in Nadaun sub-division of Hamirpur district. The aim was to generate hydro electricity and use water for irrigation in adjoining areas of both districts. It was planned that thousands of hectares of land would be brought under integrated irrigation scheme on both river banks to enrich the economy of farmers. The government initially worked on two proposals of power generation, including 50 mW and 66 mW power project. But finally, it was decided to work on the 66 mW proposal.

The project is designed to generate power on the run of the river with a small storage that would be utilised for generating power during the lean season. It was estimated that the project had the potential of generating 247 million units of electric energy in a year, if operated to 90 per cent of its capacity.

The Himachal Government tried to rope in private players for the construction of the project, but all efforts went futile. At last, a memorandum of understanding for the execution of the project was signed with the Satluj Jal Vidyut Nigam Limited (SJVNL) on October 27, 2008. The detailed project report of the project was already prepared and even the forest and environment clearances of stage-1 were obtained in 2011. Since then, no major breakthrough was seen either on the proposed dam site, or at any execution level.  Surprisingly, the state government took over 12 years to get the DPR prepared and obtain forest and environment clearances.

Pertinently, the cost of the project, when it was conceived was about Rs 400 crore, which has now escalated to Rs 810 crore as per the SJVNL records. Meanwhile, the cost of acquisition of private land had increased by four times. Sources from the SJVNL revealed that the land acquisition may cost over Rs 350 crore now, which was estimated to Rs 60 crore in the initial DPR.  The SJVNL claimed that the acquisition for the private land was in process, but so far, there was no fund allocation for the same.

The modules of the DPR and MoU with the SJVNL are learnt to be unsuitable for SJVNL, hence the reallocation of the project was under process with SJVNL on “Stand alone Boom Basis” since December 25, 2018, which is yet to be signed.

No progress on ground, but Rs 2 cr spent on CSR activities

SJVNL had established its operation office at Hamirpur since 2008 and had appointed a senior officer as the project head. It also established a land acquisition office and a lavish transit camp (guest house). A team of over 35 people at various levels was appointed to take care of the project. Surprisingly, all these officers and other employees were waiting for the government nod from many years and had virtually no or legible work to do.  It was learnt that the SJVNL had spent around Rs 2 crore under its Corporate Social Responsibility programme. It had also provided financial assistance to the students of the project area for undertaking industrial trainings. SJVNL had also tried to impart skill development programmes to youth in the villages of the project affected areas. However, nothing towards the construction of the project is visible on the ground.

It was estimated that the establishment cost of Dhaulasidh project offices is around Rs 20 lakh per month that includes salaries, traveling, building rent and other maintenance and miscellaneous expenditures.

Gauge and Discharge data monitoring: Gauge measurements of water flow were being taken since December 2010 at two places including Amli village (dam site) and at Sujanpur.

Automatic Weather Station: Two automatic weather stations — one at Sujanpur and another near the dam site at Jheen village —  were installed.

Delay made the project unviable

The 21-year delay in the construction of Dhaulasidh hydro power project has not only escalated the cost of the project, but virtually made it unviable. It was learnt that SJVNL had now sent a request letter to the Ministry of Power on February 8, 2019, for taking up the issue with the state government to consider reducing the rate of free power for initial years, reimbursement of GST, waiving of LADA etc. for making  the project commercially viable. SJVNL had also sent a request letter to Hamirpur and Kangra Deputy Commissioners for the reduction of existing circle rates to make the project commercially viable.

SJVNL spends over Rs 3 crore every year on the establishment of the project office. In the last 10 years, it has siphoned off nearly Rs 30 crore without any fruitful gains. Instead, the office has become a liability for the SJVNL. People of the area are disappointed following the delay caused in the project. Ramesh Kumar of Choru village, near the site, said people were waiting for the project for the past 10 years and still, nothing has been done on the ground. Another villager from Jeehan said the board installed by the SJVNL shows the way to the project site, but there was nothing there, not even a single stone.

Everything is ready with the SJVNL. An application to extend the environment clearance was moved to the Ministry of Environment and we expect to get it soon. We are waiting for the government's nod to start the work at the dam site.— Vinod Anand, Project head, Dhaulasidh Hydro Electricity Project