These tea estates are ‘not for sale’

Residents of Palampur have strongly opposed the government’s recent move of “selling tea gardens for setting up defence establishments in Gopalpur and Nagri areas”, 10 km from here. 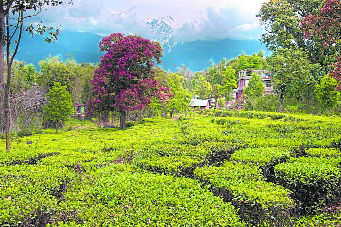 Residents of Palampur have strongly opposed the government’s recent move of “selling tea gardens for setting up defence establishments in Gopalpur and Nagri areas”, 10 km from here.

They asserted that if the tea gardens were sold and concrete jungles were developed in tea estates, it would adversely hit the tourism industry and spoil the clean and green environment of Kangra valley. Beautiful tea gardens of the valley situated in the foothills of snow-clad Dhauladhar range attracts thousands of tourists every year.

Ministry of Home Affairs in a letter had asked the state government to explore the possibilities for providing 88 acre land for setting up an Army cantonment in Gopalpur and Nagri areas of Palampur. The land is stated to be under tea cultivation at present. As soon as the contents of the letter of the Home Ministry came in public domain, area residents lodged strong protest and opposed the move asking the state government to turn down the request to save the lush green tea gardens of Kangra valley.

Vijay Kumar of Gopalpur said the government should not allow the sale of tea gardens as these were the pride of Kangra valley. Instead of allowing its sale, the government should bring more land under tea cultivation like Kerala and Karnataka. He said some property dealers were behind the proposed sale of tea gardens in connivance with local politicians. He appealed to CM Jai Ram Thakur to intervene and save the tea lands of Kangra.

Vinod Kumar of Nagri said if the government will allow the sale of tea gardens, it would result in unemployment and dislodge those who were engaged in the tourism industry by setting up small shops, restaurants or vends. He said there was no justification in converting green areas into concrete jungles and said the government should provide alternative land lying vacant.

KB Ralhan, member of People’s Voice, an NGO fighting for the protections of environment in Palampur, have asked the government not to allow the sale of tea gardens in the valley. If the tea gardens would be sold off, it would be a major environmental threat, he said.

Tea first introduced between 1830 and 1840 in Kangra valley

What the law says...

The tea gardens of Gopalpur are a major tourist attraction and the government should not grant permission for the sale of these gardens to the government of India. I am not opposed to setting up a cantonment or other defence establishment, but other land should be given to the Army for the construction of cantonment instead of converting the green areas covered with tea plantations into concrete jungles. — Parveen Sharma, Former MLA