WHEN the chief ministers of Punjab, Haryana, Himachal Pradesh and Uttarakhand — in a first — came together in August last year to firm up a strategy to jointly combat the scourge of drugs through sharing data and biannual review meetings by the CMs, and every three months by the chief secretaries/DGPs, there was suddenly a new hope that the collective might would taste success. 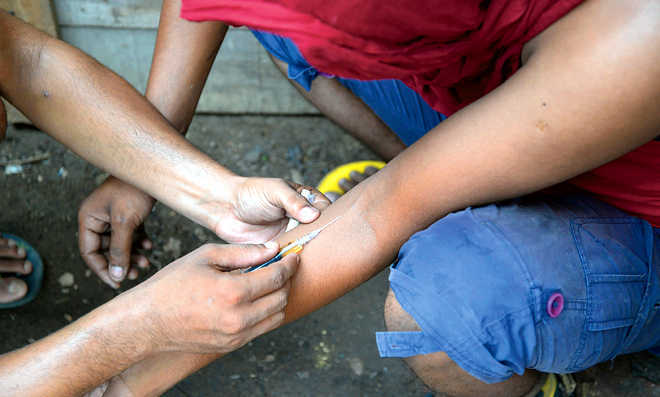 WHEN the chief ministers of Punjab, Haryana, Himachal Pradesh and Uttarakhand — in a first — came together in August last year to firm up a strategy to jointly combat the scourge of drugs through sharing data and biannual review meetings by the CMs, and every three months by the chief secretaries/DGPs, there was suddenly a new hope that the collective might would taste success. It has, frustratingly, met with glacial progress. Earlier, the menace was largely limited to Punjab, but has now spread its sticky tentacles to neighbouring states. Data reveals that there has been a steady rise in the use of semi-synthetic opioids like smack and heroin, and alcohol in Haryana. Rohtak PGIMS has witnessed a disturbing 10-fold decadal increase in addiction cases.

The numbers speak for themselves: in 2009, 573 patients visited the centre; in 2018, over 5,000; and so far this year, already over 3,600 have made the trip. These are registered numbers. The conservative estimate would be higher across the state. This itself raises concern, but what’s more worrisome is that most addicts are in the productive age group of 15 to 35. The predictable fallout is the spread of HIV and hepatitis and a spurt in crime. Easy drug availability is a major factor, but vulnerability borne out of the inability to face challenging situations should be addressed by school counsellors. ‘Catch them young’ must be the buzzword. The state, educational institutions, parents, and the police need to work as a synergetic whole.

Last year, Haryana had announced the establishment of more de-addiction centres. Punjab has many such centres, and is still grappling with the epidemic. Rehabilitation is essential, but the emphasis must equally be on the ‘source’ and eradication of the ‘cause’. For this, politics of courage and an ever-ready police force is critical. Hit where it hurts. Every raid sees action only against a conduit, who is the smallest link in the chain. Till such time the big fish keep dodging action — facilitated, by lawmakers and enforcers — this corrosive affliction will continue to devour society’s vitals.