NEW DELHI:In a significant verdict, the Supreme Court has said candidates availing of age relaxation under reserved categories for government jobs can’t claim the right to be appointed under the general category. 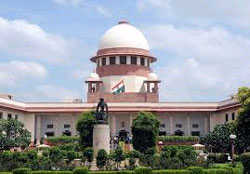 In a significant verdict, the Supreme Court has said candidates availing of age relaxation under reserved categories for government jobs can’t claim the right to be appointed under the general category.

“We find that there is an express bar for the candidates belonging to SC/ST/OBC who have availed relaxation for being considered for general category,” a Bench headed by Justice R Bhanumathi said.

The Bench dismissed the appeal of one Deepa, belonging to the Dheevara community, who had applied for the post of Lab Assistant Grade II in the Export Inspection Council of India under the Ministry of Commerce and Industry under the OBC category.

The selection went in favour of one Serena Joseph, another OBC candidate who had secured 93 marks as against 82 marks scored by Deepa. Having failed to get the job under the OBC category, Deepa wanted the government to consider her against general category seats as none from the general category secured 70 marks — the minimum cut-off marks. She moved the Kerala High Court, which dismissed her plea. However, the Supreme Court dismissed her appeal, holding that there was an express bar against reserved category candidates being considered for general category seats.

The Bench also rejected her arguments based on an earlier verdict of the top court in a case from Uttar Pradesh, saying there was no such express bar in the state law under which the employment was being considered.