In erasing humanity of Kashmir, we lose ours too

Politics today swings like a pendulum between the languages of technology and populism. A successful regime is seen as a blend of both and the BJP is a splendid witness to such a phenomenon. As a result, discussions of politics get instrumentally equated to tactics. 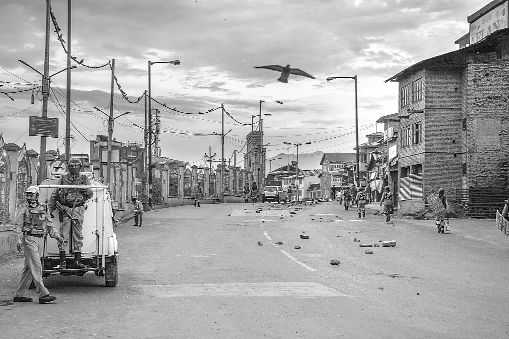 AN Eerie picture: Kashmir has become merely a territory, a turf that belongs to India. AFP

Politics today swings like a pendulum between the languages of technology and populism. A successful regime is seen as a blend of both and the BJP is a splendid witness to such a phenomenon. As a result, discussions of politics get instrumentally equated to tactics. The discussions on the integration of Kashmir are greeted with acclaim, with people contending that Kashmir is our territory. Kashmir as an idea gets reduced to space. Place, memory and people are erased in one stroke. Kashmir merely becomes a territory. We treat it as property, as a turf that belongs to India. The style of politics becomes a set of diktats and politics becomes a continuation of security by any other means. Kashmir as a conversation of democracy ceases. Kashmiris become aliens, stonepelters, terrorists, who need to be disciplined. We forget a state and a people where women and children are waiting for normalcy for decades. There is little sense of concern or care for them.

Tweets may not be fully representative but the way they read Kashmir is worrying. Firstly, Kashmir is seen as a new business of opportunity. From territory, it is transformed to property and commodity. There is little sense of the human. There is little concern that families cannot contact each other, the whole “state” is moving with little news. We justify our behaviour by saying the Kashmiris brought it upon themselves. If one listens to gossip, one hears talk about the inevitability of the step. What one hardly hears is a sense of care and compassion for the Kashmiri.

The bigger silence is for the absence of ethics, and the sad passiveness of the Gandhian imagination. There seems to be death of conscience regarding Kashmir. The debates at the most discuss constitutional mores as tactics. The morality, the ethics of the act seem to be missing. The silence is appalling but what is even worse is the language of conversation. It is the language of empire and the vocabulary of security where an entire people are dehumanised. In erasing humanity of Kashmir, we lose ours too.

Kashmir as it exists today represents the real Gandhian challenge. After all, this is the 150th anniversary of Gandhi yet the silence of the Gandhian imagination is appalling. One hoped the Congress, which had revived Badshah Khan’s Khudai Khidmatgaar, would attempt to create a new place, or at least imagine panchayats of reconciliation. Yet suddenly peace seems empty, even effeminate as India flexes its muscles. The tough no-nonsense Indian that India is enacting out Bollywood style seems to appeal to the audience. The media is accepting it all.

What one finds missing is a civilisational sense of peace. It is eerie, almost surreal, at one level. India feels it has reinvented Kashmir, exorcised its past, created a new Kashmir for its own use. Only it is an Indian Kashmir, which has no place for Kashmiris. It is as if history has become an abstraction and Kashmir as a dialect of pain, waiting, suffering has been erased. We somehow feel Constitutions can be swept aside and new constructs created. This new Kashmir is a diktat, a construct without any sense of debate or consultation. The Indian public treats it as a new immaculate conception and we are so excited, no one thinks of costs in the long run.

India which long felt that foreign policy should be anchored on a civilisational perspective has opted for an amoral politics. The amoralism has public approval. It is almost as if the public thinks goodness is literally effete and has limits and what one needs is tough pragmatism. What is the use of morality when it does not work? This new pragmatism also plays to our search for machismo. One senses this is a decision taken by men and its manliness sends a new signal to other nations. India as a soft state no longer exists. Our pragmatic decisiveness appeals to the middle class, which feels that broader problems have been subject to benign neglect.

Suddenly our elite and our middle class feel we have grasped a problem and got it under control. India for the first time looks decisive over Kashmir. There is a sense of an exorcism of the past, a past we psychoanalyse in terms of easy metaphors, projecting that Nehruvian India is dead and we have resumed the era of Patel. His statue looms tall as an inspiration to us. Amit Shah, also from Gujarat, is seen as forging a new genealogical continuity of loyalism, sincerity, craft and decisiveness.

The question is, are we solving problems on the ground or exorcising the image of ourselves? Right now curfew and President’s rule make us feel we are under control. This need to feel in control haunts the Indian sense of machismo. It is almost as if Kashmir is emptied out as India becomes a psychological imaginary to be analysed. The question one must ask is in rewriting history or atoning for it, are we destroying the little sense of democracy, of peace we have left? It is not only Kashmir that we have to confront but our distorted sense of ourselves. In fact, this might be a bigger problem than Kashmir or Pakistan-India confronting. This prospect needs a bit of reflexivity. What looks like a prospect of decisiveness may be a symptom of bigger problems to come.

9 hours ago
2
TRYSTS AND TURNS