A meeting of the External Affairs Committee on Doklam was held on August 9, 2018. 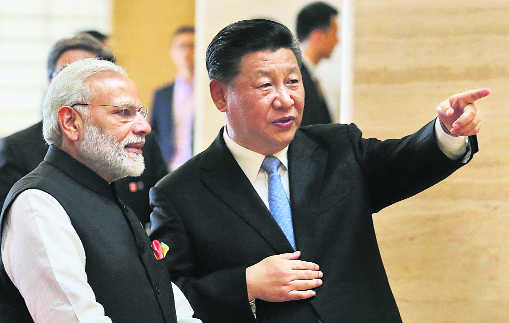 A meeting of the External Affairs Committee on Doklam was held on August 9, 2018. External Affairs Minister Sushma Swaraj last month in Parliament spoke assertively on two inter-related issues — Doklam and Wuhan, the first summit between President Xi Jinping and Prime Minister Modi. The Doklam standoff, she said, was resolved with China through 'diplomatic maturity and without losing any ground', adding 'status quo had been maintained.' The facts are somewhat different.

At a US Congressional Foreign Affairs Subcommittee hearing on this on July 25, Congresswoman Ann Wagner referred to the faceoff and said: 'Although both countries backed down, China has quietly resumed its activities in Doklam.' She added: 'Neither Bhutan nor India had sought to dissuade it and China's activities in the Himalayas were reminiscent of its fait accompli in South China Sea.'

Minister of State of External Affairs and former Army Chief, Gen VK Singh, said: 'Since disengagement of Indian and Chinese personnel in Doklam on August 28, 2017, there have been no new developments at the faceoff site and its vicinity.' Here, too, the facts are different.

The US Congresswoman's report calls for a more serious investigation. Firstly, the claims that the faceoff was resolved without 'losing any ground' can be interpreted differently. India did not lose any ground because Doklam is on the Bhutanese territory. Bhutan has not said a word more than a press handout on June 29, 2017, hoping that the status quo in the Doklam area will be maintained as before June 16, 2017. India intervened to prevent Chinese intrusion on Bhutanese soil which is also claimed by China. India let China off the hook in Doklam where it was militarily disadvantaged by seeking a pullback enabling Beijing to conduct the BRICS summit at Xiamen as well as the 19th Communist Party Convention.

Though Swaraj had said in Parliament that the resolution of Doklam would be through mutual and simultaneous withdrawal, it was a sequential withdrawal, with the Indian troops withdrawing first followed by the PLA after declaring victory and hoping India had learnt the lessons. India had thus snatched psychological defeat from the jaws of a victory.

As for the military build-up, the PLA constructed military fortifications, helipads, and logistics wherewithal for more than a battalion strength from scratch during the 73-day stand-off, with a further creep into the Bhutanese territory. Not a single Bhutanese soldier came out to join hands with Indian troops when they were locked in the face-off.

The Indian Army, as it is its wont, has downplayed reports of heightened Chinese activity in the Doklam area, saying that the PLA has not crossed the Torsa Nullah, which is India's red line to reaching the strategic tri-junction Gympoche, as claimed by China against the Indian version of the disputed tri-junction Batangla, 7 km to the north. No territory on the 100 sq km Doklam plateau belongs to India. Diplomatic maturity is a euphemism for concessions enabling PLA to strengthen its defences in the area.

On the Wuhan summit, it would have been in conformity with parliamentary practice had Modi, who was present in the House, chosen to speak about it as requested by Members of Parliament. Instead, Swaraj said: 'I may not have been there, but I am capable of replying the question', adding, 'the summit was to ensure mutual comfort, mutual understanding and mutual trust and we have achieved success in all three objectives.'

What is less known is that like the disengagement from Doklam, Wuhan too was sought by India for securing the necessary comfort on the China front of the two-front scenario to ensure no military distractions develop in the run-up to the 2019 elections.

Again, substantial concessions were made to Beijing to establish New Delhi's bona fides in seeking the summit. To recap, serious back-channeling was done by Foreign Secretary Vijay Gokhale, NSA Ajit Doval and Ambassador Gautam Bambawale with their Chinese counterparts.

The post-Doklam reset with China was begun by relocating the Dalai Lama's 'thank you for 60 years of Indian support' function from New Delhi to Dharamsala and an advisory from the Cabinet Secretary directing all government officials to skip the ceremonies. The inter-faith ceremony at Rajghat on the 60th anniversary was postponed.

The seventh World Parliamentary Convention on Tibet was shifted from New Delhi to Dharamsala. The Dalai Lama's visit to the Indian Science Congress in Manipur was cancelled.

The 20th annual International Asian Conference at the IDSA, New Delhi, which was to cover the BRI and be attended by delegates from the RoC, Taiwan, was cancelled at the eleventh hour due to fear of China-bashing. Australia was dropped from the annual Malabar Naval Exercise. Air India renamed its flight to RoC as Taipei, China.

On the upside, India and China are to work jointly on a capacity-building project in Afghanistan. The Mansarovar pilgrimage has been resumed as has the sharing of hydropower data on the Brahmaputra river.

The military exercise, Hand in Hand, is likely to be resumed in December. The hotline between Indian  and Chinese DGMOs pending since 2013 is stuck as the PLA wants it to terminate at the Western Theatre Command, not in Beijing, as India wants. The Chinese Defence Minister will visit India and so will his Indian counterpart, Nirmala Sitharaman, travel to China.

The 21st round of Special Representative (SR) talks between Doval and Foreign Minister Wang Yi are to be held in Beijing, but the border question has been on the backburner since 2013 when it hit a cul de sac over the Mutually Acceptable Political Framework. After Wuhan, the two leaders urged the SRs to intensify efforts to seek a fair, reasonable and mutually acceptable settlement of the boundary question. This is simply diplomatic verbiage, considering Xi rebuffed Modi when he sought clarification of the LAC in 2014.

In an unprecedented three-day visit, Chinese Vice-Foreign Minister Kon Xuanyou, accompanied by a delegation, slipped into Bhutan last month and met King Jigme Khesar Namgyel Wangchuck and Prime Minister Tshering Tobgay. Like they have done in Nepal, the Chinese want to liberate Bhutan from Indian hegemony, says the Global Times. Elections are due in Bhutan in October.

Article 2 of the India-Bhutan Treaty reads: 'Both countries will cooperate closely on issues relating to national interest. Neither will allow use of its territory for activities harmful to the national security and interest of the other.' This is the de facto defence agreement that former Defence Minister Arun Jaitley spoke about during the Doklam standoff at an India Today conclave.

Why is India coy about it?