NEW DELHI: India and Italy on Tuesday discussed steps to enhance cooperation in areas of trade, investment, energy and technology. Prime Minister Narendra Modi today held talks in Delhi with his Italian counterpart Giuseppe Conte, who arrived this morning to participate in the 24th edition of the India-Italy Technology Summit. 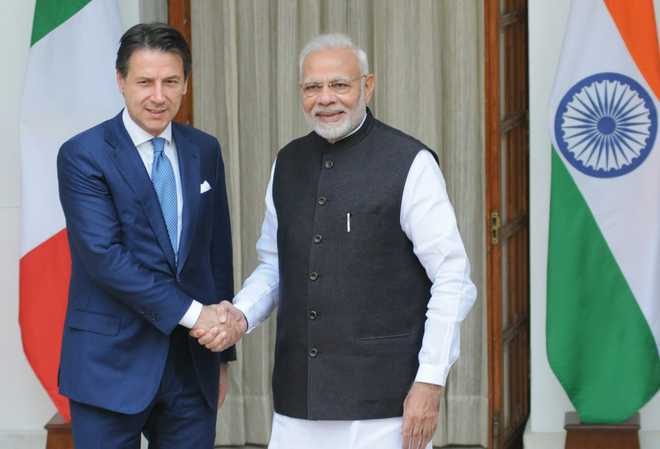 India and Italy on Tuesday discussed steps to enhance cooperation in areas of trade, investment, energy and technology. Prime Minister Narendra Modi today held talks in Delhi with his Italian counterpart Giuseppe Conte, who arrived this morning to participate in the 24th edition of the India-Italy Technology Summit.

"The leaders reiterated that India and Italy ties are based on shared principles and values of democracy, freedom, rule of law, respect for human rights and territorial integrity of States," said the joint statement post talks.

"India and Italy have decided to boost ties in key sectors such as lifestyle accessories design, transportation and automobile design, energy, life sciences etc. Such extensive engagement will benefit the citizens of our nations," tweeted PM Modi.

Reaffirming their commitment to global non-proliferation efforts, PM Conte reiterated Italy's support to India's intensified engagement for admission into the Nuclear Suppliers' Group (NSG). Both PMs also called for strong measures to be taken against support and financing of terror outfits and to implement Security Council resolution 1267 that imposes sanctions against terror entities. "They condemned all kinds of State support to terrorists, including cross-border terrorism, and providing safe havens to terrorists and their network," said the joint statement with no individual terrorist or group named.

Seeking improved transparency, dispute settlement mechanism, and rule making functions of the WTO, the top leaders 'committed to ensure free and open trade on a level-playing field and fight all forms of protectionism, including protectionist unilateral measures and unfair trade practices'.

Organised by the Department of Science and Technology along with industry body CII, the technology summit focussed on key sectors as health care, aerospace, renewable and clean energy and ICT (Information and Communication Technology). Bilateral trade between India and Italy increased to $10.5 billion in 2017-18 from $8.8 billion in the previous fiscal. "Regarding our economic partnership, we've explored possible Italian contribution to 'Make In India'," said Conte at the summit.

The next session of the India-Italy Joint Commission on Economic Cooperation (JCEC) will be convened in India in 2019 to work towards constituting a CEO Forum and setting up a Fast Track Mechanism to promote two-way investments. To boost joint ventures in infrastructure sector in India , both sides agreed to foster contacts between Italy's Cassa Depositi e Prestiti (CDP) and India's National Infrastructure Investment Fund (NIIF).