Interim ban on construction in 100-metre area around airport

CHANDIGARH: Less than two months after the Indian Air Force expressed safety and other concerns regarding the Chandigarh international airport, the Punjab and Haryana High Court today ordered interim ban on further construction in a 100-metre area from the boundary wall of the landing field. 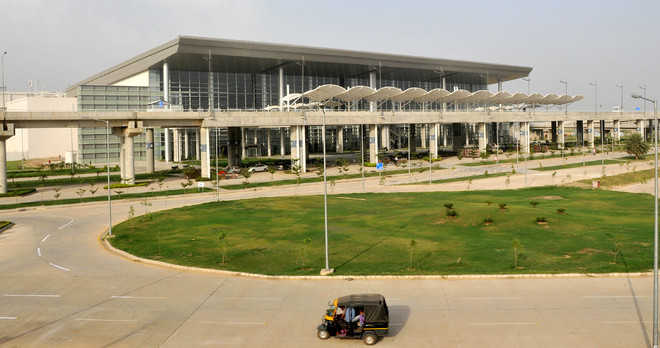 Less than two months after the Indian Air Force expressed safety and other concerns regarding the Chandigarh international airport, the Punjab and Haryana High Court today ordered interim ban on further construction in a 100-metre area from the boundary wall of the landing field.

A Division Bench of the High Court also made it clear the to Greater Mohali Area Development Authority to carry on with the activity of demolishing illegal structures falling in the area under its jurisdiction. Taking note of GMADA’s assurance that it would issue orders in this regard by Monday, the Bench directed the state of Punjab to provide adequate police force.

The Bench of Chief Justice Krishna Murari and Justice Arun Palli also made the Zirakpur Municipal Corporation a party to the ongoing public interest litigation on making the airport fully operational. It was also directed to initiate action against illegal constructions in accordance with law. The Bench also called for a detailed report on the issue.

Appearing before the Bench, Assistant Solicitor General of India Chetan Mittal said the issue of illegal constructions was being raised since long. He added that the worst affected was Phabat village in Zirakpur, where multi-storeyed buildings were coming up overnight.

Elaborating, Mittal said the height of the airport boundary wall was 11 ft and any structure higher than that was dangerous. Quoting an example, he said a joint survey was carried out after a high-level meeting of all stakeholders was convened by the amicus curiae or the friend of the court, senior advocate ML Sarin. However, the Zirakpur EO did not participate in the process.

Besides, the construction of a building was brought to the Mohali Additional Deputy Commissioner’s notice again and again, initially when it started, again when the first floor was constructed and then when the second floor came up. Taking a serious view of the matter, the Bench verbally asked the EO to seek voluntary retirement.

The Chandigarh Administration, in the meantime, undertook to acquire and pay for 0.6 acre essential for providing the CAT-III facility to enable landing during poor visibility. The Bench, during the course of the hearing, was informed that major deadlines for pending works had been fixed following the meeting convened by senior advocate Sarin. The Bench was told that the work on resurfacing and extension of the airport would be completed by March 31 next year.